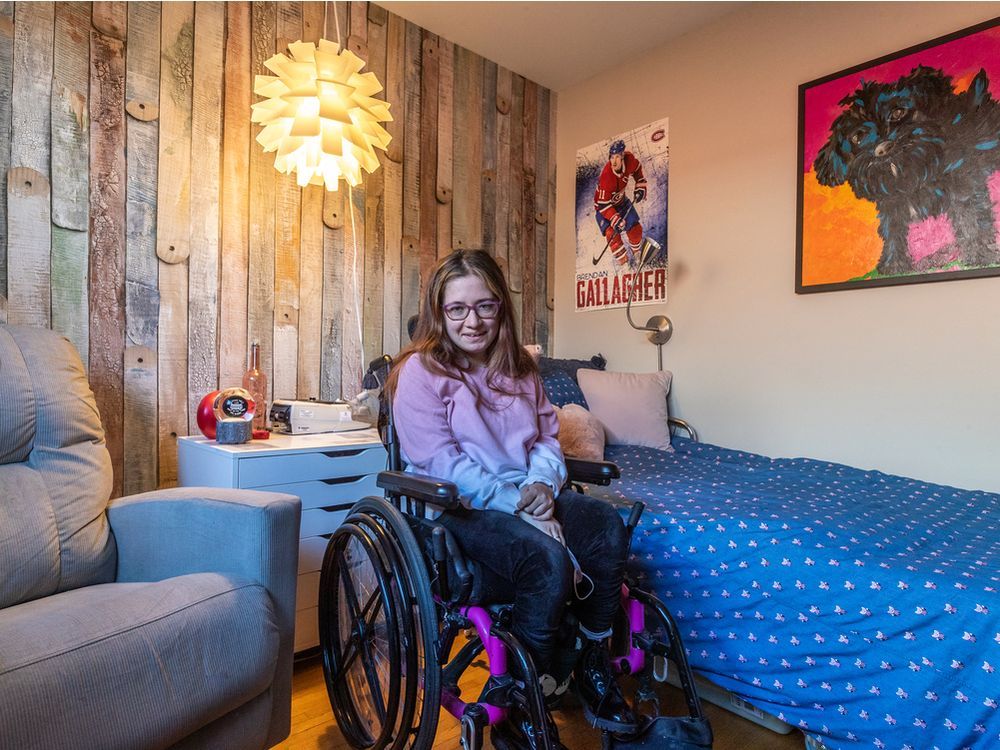 A Labor of Love Transforms Rooms for Children with Disabilities

Sandrine Korsos, 19, was born with spina bifida – it’s a birth defect of the spine – and other health issues and has had 31 operations in her young life. She has been in hospital for four and a half years in the past nine years and, when she is at home in the West Island bungalow she shares with her parents and brother, she spends a lot more time in his room than many young people spend in theirs.

What if her bedroom has soft, soothing gray walls, a rustic-style wall mural and a comfy recliner, if she has a free-standing IKEA closet with a clothes rail she can easily reach from her wheelchair and drawers that slide smoothly, thanks to the Espace Espoir Foundation.

The charity’s mission is to transform the bedrooms of children and teenagers in the Montreal area with chronic illnesses or disabilities, at no cost to their families. The goal is to improve their daily lives “by transforming the space in which they spend most of their time into a bright space that inspires them to stay positive so they can hope and dream,” the statement reads in part. foundation mission statement.

“Sandrine spends so much time in her room,” said her mother, Sylvie Jacques. “Her bedroom is her life – and she’s so happy about it now.”

The Espace Espoir Foundation was created in 2019 by Andrea Leber after he stopped working full-time in the family painting and decoration business, Leber et Fils.

“It’s kind of a labor of love, a way of giving back,” she said. “I have all these contacts: paint companies, painters, electricians and carpenters, and I thought it would be a really fun challenge.”

Such foundations are popular in the United States, but are lesser known here, Leber said.

“It was about using her expertise and her resources to help people,” said Julie Guindon, director of Espace Espoir.

In families with children who spend a lot of time in the hospital, parents simply don’t have time to paint or decorate a room, Leber and Guindon said. And in some cases, families also face financial constraints.

Leber meets families, visits young people at home and checks their rooms. They have a say in what they want to do in their rooms in terms of theme, decor, and issues like storage.

In a bedroom, for example, a new bed has storage to accommodate a child with a small room and many toys. The decor of another room has been changed from one suitable for a small child to one more suitable for a young adult. In another, a special swing has been installed for an autistic boy.

Korsos’ room was the first of eight rooms that have been decorated so far. She chose soft gray to replace the pink on the walls and chose the wall mural, which has a barn wood vibe.

It’s a pleasant and inviting room, with his collection of snow globes on display and a poster of his favorite Canadiens player, Brendan Gallagher, on one wall. The two met during a visit by some team members to the Montreal Children’s Hospital in 2019 when Korsos was a patient. A student at the Place Cartier Adult Education Center in Beaconsfield, she is not only a hockey fan but also a player: she plays sledge hockey, an adaptation of ice hockey designed for players with physical disabilities.

The Espace Espoir Foundation has also refreshed two of the five rooms at the Angelman Respite Center with new wall decorations, a new comforter and, in one room, a jungle-themed mural. “It’s the children’s favorite room,” said Sophie Dubé, co-founder of the center and director of the Quebec Angelman Foundation, which raises money for the weekend respite center in Pierrefonds.

Leber et Fils is the largest patron of the Espace Espoir Foundation, providing all the paint and labour. Those who work on the projects — the painters, carpenters and others — are all professionals who volunteer their time. Because much of what is incorporated into redecoration projects is purchased, the foundation also relies on financial donations.

The COVID-19 pandemic has made it difficult to generate interest or fundraise, but the hope is that will change as things open up, Guindon said.

To be considered, families must live within 30 kilometers of Côte-des-Neiges Road from the foundation. office and have a child between the ages of 4 and 17 with a chronic illness or disability. Proof is required, in the form of a letter from the child’s medical professional or school, and requests are reviewed by Leber and Guindon.

“I saw how paint can transform a space,” Leber said. “The simple act of applying a coat of paint, changing the bedding and organizing the storage space can make all the difference.”

To learn more about the Espace Espoir Foundation, to request a room renovation, to volunteer or make a financial contribution, visit espaceespoir.org or call 514 739-1088.

Pop-up shops and markets around Vancouver in April and May