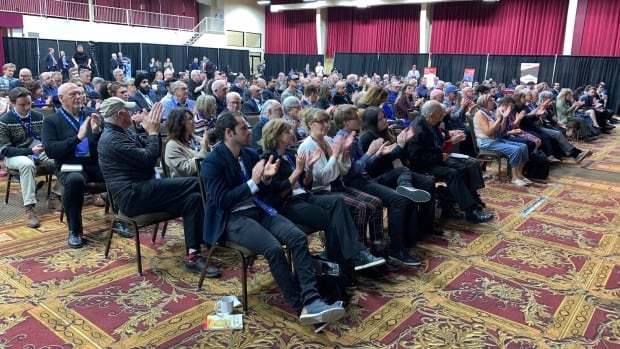 At a Conservative networking event, Jason Kenney said he never intended to ‘be part of this gig for a long time’

Alberta Premier Jason Kenney made some of his final comments as the province’s leader on Saturday, speaking at an event attended by candidates vying to replace him.

At a Canada Strong and Free conference in Red Deer, Alta., Kenney said he was proud of much of the legislation passed during his premiership, but said he would have gone further in health care reform if the pandemic had not stifled those efforts.

However, the province is moving forward with its Chartered Surgery Initiative, which will contract out surgeries to the private sector and be publicly funded.

He also said that if he had run for re-election, he would not have stayed long.

“I never intended to be here for long. Frankly, I always intended to go in the next election, probably about a year to 18 months later,” he said .

“I never intended to be in this concert for a long time.”

Reflecting on the state of conservatism, Kenney said there was growing anger among the alt-right fueled by conspiracy theories on social media and “hypercharged” by the pandemic.

“Social media emerged 20 years ago and allows people with these kinds of attitudes to self-publish, then find a virtual community online, and then push each other into a constant state of anger,” Kenney said.

This has led to the rise of alt-right media to fill the market, he said.

“And for a lot of them, their business model is the monetization of anger. And revenue only flows if people are more and more angry.”

“I know it’s an old-fashioned feeling, but I actually believe that civility is a conservative value. And there’s a growing sense of deep incivility. And that concerns me a lot,” Kenney said.

He added that he feared conservatism would “become a caricature of a kind of mean, angry populism that would also systematically lose at the polls.”

In May, Kenney announced his resignation as leader of the UCP after receiving 51.4% approval of his leadership from UCP members.

Leela Aheer, Danielle Smith, Todd Loewen, Rebecca Schulz and Brian Jean, Rajan Sawhney and Travis Toews are all in the running to be the party’s next leader.

Economy and health among important issues for UCP voters

Some participants showed up to hear the candidates and their position on the issues.

Calgary student Rahim Mohamed said his vote is still undecided and he wants to choose who has the best chance of winning the next provincial election.

He also wants to vote for someone who will focus on the economy.

“Finding a way to think longer term… planning some kind of long term use of incoming oil revenues and who has the best long term vision for growth and hopefully diversification of the economy of the world.” ‘Alberta,” he said.

“I am a cancer survivor. If I hadn’t been able to get early treatment, I probably wouldn’t have survived.”

Tunde Obasan of Edmonton said he is looking for a candidate who will focus on jobs and the economy.

“[Someone to make sure] Alberta is an environment where employers, job creators can find us a good environment to start a business or to relocate their businesses, you know, and that will create more jobs and stimulate the economy in the long run. »

The UCP will choose its new leader on October 6th.