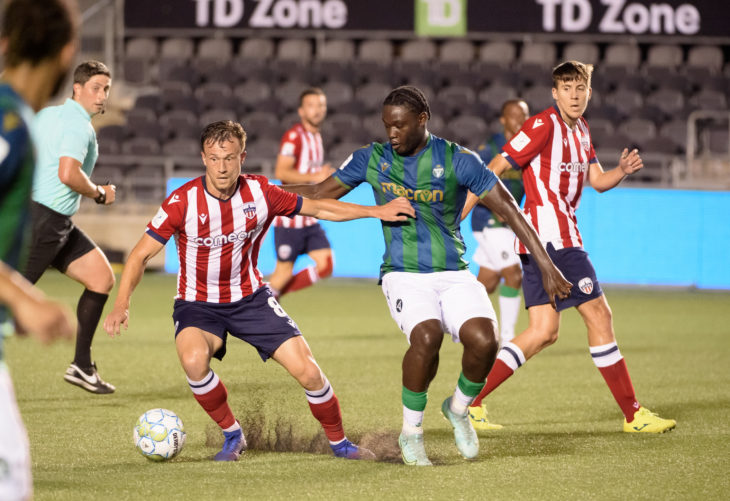 For the second game in a row – and the fourth time in their last five games in all competitions – York United is embroiled in an all-Ontario clash, as they head to TD Place to face Atlético Ottawa.

The two teams played in four-goal games last weekend. Diyaeddine Abzi scored the only goal for the Nine Stripes in a 3-1 905 Derby loss to Forge FC in Hamilton, while ten-man Ottawa drew 2-2 thanks to a 75th minute scored by Malcolm Shaw.

Ryan Telfer was the sent off for Ottawa in that game, receiving a yellow card for a bad tackle at the end of the first half, and being sent off moments later after the ensuing skirmish in midfield . Ottawa was already short of players, having named just four substitutes in this game as they continue to face injuries, and will be without one of their best forwards for the game against their former team.

These teams have met twice before: a 0-0 draw at the Island Games in 2020 and a 1-1 draw in Atlético’s second home game on August 18, just a few weeks ago. Alvaro Rivero scored the first goal for York, but with a few moments left in the game, Alberto Soto equalized to steal a point for the home side.

Three points on Wednesday would move Ottawa from 8th to 6th place, as their 12 points are two behind the HFX Wanderers and FC Edmonton above them. It would also leave them just two points behind fifth-placed York. A victory for the Nine Stripes would put them two points behind Valor FC in fourth – and a coveted playoff spot.

Make your match choices before kick-off at canpl.ca/predictor get a chance to win prizes, including the grand prize of a trip to the 2021 CPL Final!

3 THINGS TO LOOK FOR:

“York is a very competitive team, they have good quality players. We have to work a lot if we are to win this game. – Atlético Ottawa head coach Mista

“They’re at home, I expect them to take center stage and I expect the fans to push them forward. They miss [Ryan] Telfer, they also have a few injuries, so I’m not sure what the lineup will be exactly, but I think it’s going to be a good game tomorrow. – York United Head Coach Jimmy Brennan