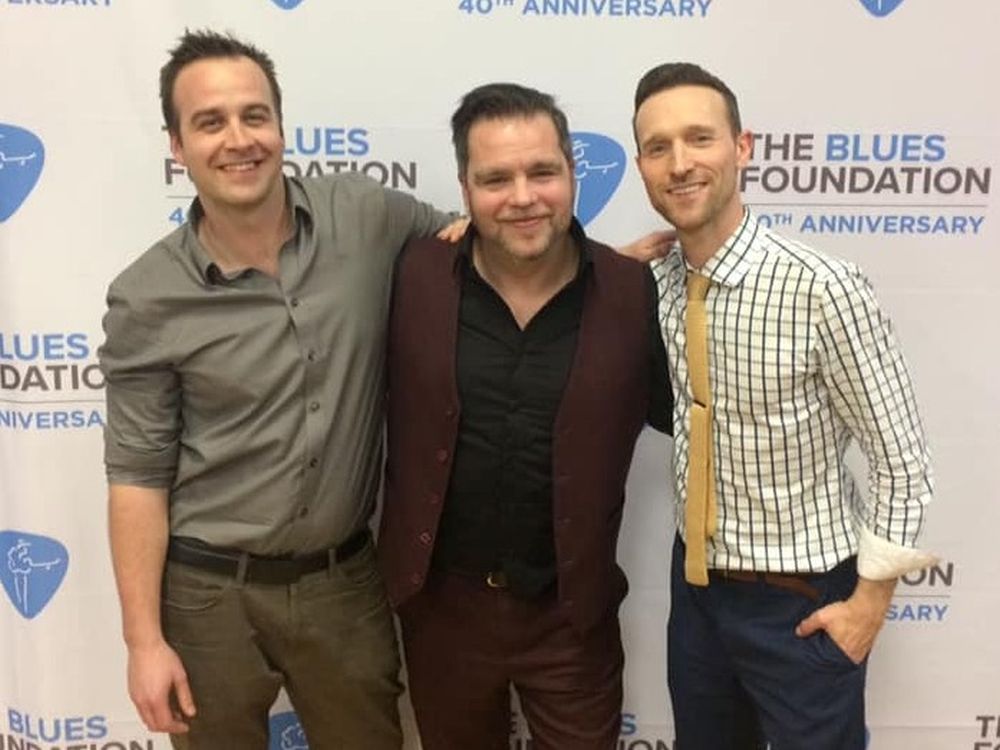 Reviews and recommendations are unbiased and products are independently selected. Postmedia may earn an affiliate commission on purchases made through links on this page.

Last June, guitarist JW Jones was working on a record deal for his latest act, HOROJO Trio, around the same time bandmate Jeff Rogers was planning his wedding.

Nine months later, you can guess what happened: The Ottawa band’s debut album, Set The Record, is out this week on Stony Plain Records — and Rogers and his wife, Tori, have a nice addition to the HOROJO family. Their daughter, Ophelia Lily Ann Rogers, was born on March 18.

“I’ve been a professional musician for 24 years and of course they’re waiting until I have a baby on the way to give me a record deal,” Rogers joked in an interview. “When it rains, it pours.”

While things weren’t exactly planned to go this way – the record was supposed to be earlier – no one is complaining. The baby is healthy and the record is terrific, a superb soulful blues platter that showcases the combined talents of three of Ottawa’s finest musicians: soulful Rogers, blues guitarist Jones and jazz drummer Jamie Holmes . (The band name is made up of the first two letters of each musician’s last name.)

This is the group, you may recall, that formed at the suggestion of an Ottawa pub manager in 2018 (take a bow, Jeff O’Reilly) and won top honors from the International Blues Challenge in Memphis in 2020, a talent competition aimed at discovering the best new blues artists from around the world.

Winning is a big deal that usually comes with a guaranteed spot on the blues festival circuit, huge publicity, and maybe even a record deal. Instead, the COVID-19 pandemic hit and essentially shut down the music industry, sending everyone home to wait.

For HOROJO, the downtime was a challenge, but they decided to put it to good use, hosting songwriting sessions over Zoom and rehearsing when allowed.

“The pandemic gave us time to focus on making this record,” Jones said, “which was great because if we had come home from IBC and things were normal, we would have maybe put all our energy into playing gigs. We literally had no excuse, so we were like, ‘Let’s make a record.’

The first thing to establish was their sound. Rogers was keen to be part of an outright blues band, but Jones wanted to distance himself from his electric blues style.

“We wanted it to represent all of our influences,” Jones said. “We just kept kicking it with different chord changes and melodic ideas. And in the end, it sounds like a blues album, but more contemporary, more like a Robert Cray than a Buddy Guy (album).

For his part, Rogers calls the trio his “ideal” band.

“It’s about bringing a new blues sound to each of our prospects,” Rogers said. “JW opens with a more soulful and funk side of the blues, my vocals and bass (played on the keys) add an R&B element, and then there’s the character that Jamie brings to the drums. He’s a drummer very loud and erudite jazz music, so with someone like that in the back, we can go anywhere. We can reduce it to a whisper and go back anytime.

The keyboardist also points out that it’s not only convenient to be part of a small band when planning a tour, but also fun for the musicians.

“I was excited to put together a small, compact and powerful trio that we could hit the road with,” Rogers said. “But it’s also a trio of guys who have decades of experience individually, so there’s a maturity to the game. I play with a lot of fantastic musicians, but the more brains you have on stage, the better everything has to be. orchestrated, organized and planned.As a trio, you are much more nimble and can get away with flying by the seat of your pants a bit more.

The three men had no problem knocking out the musical ideas for their songs, but when it came to lyrics, they brought along a secret weapon in the form of veteran Ottawa musician Dick Cooper of Cooper Brothers fame. Nine of the 11 tracks were co-written with the elder singer-songwriter (the other two with fellow Canadian bluesman Steve Strongman).

Rogers says if he had to identify one theme, it would be emotional durability. “In the age of social media, it’s easy to get lost or to feel like you have to accept what people are saying,” he said. “There are a lot of songs here where the theme is about accepting yourself, knowing your limits, accepting the things that make you different and not letting anyone hold you back from that.”

As for the dynamics of a trio in which two of the three members are used to being in charge, decisions are generally made collectively.

“It’s an interesting proposition to have two conductors in a trio. Everything is generally democratic, but when there are traffic jams, it depends on the subject,” Rogers said, explaining the division of labor.

“When it comes to being on stage and the music, I have a little more say. But when it comes to all the party management stuff, JW is brilliant. He has managed his own career for over 20 years. In the end, I like to say that he is the boss and sometimes I am the leader.

(HOROJO Trio is having an album release party at Rainbow Bistro at 8 p.m. on April 1. Tickets at therainbow.ca.)