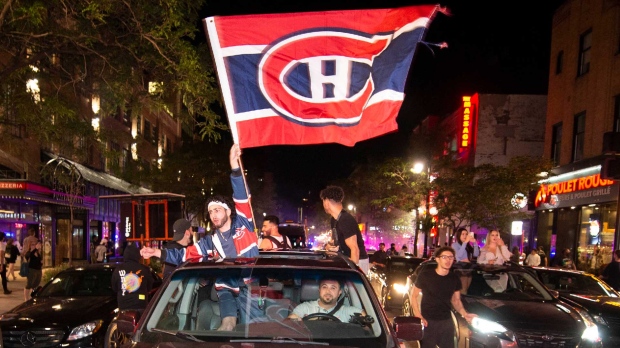 MONTREAL – Montreal is gearing up for the Habs first Stanley Cup final in 28 years, but one question remains above the excitement: How will the celebrations be affected by pandemic public health rules?

On Sunday, Mayor ValÃ©rie Plante tweeted that the city “is working very hard on different scenarios that would allow CH fans to see the matches of the final away and in complete safety”.

Since last Thursday, and the accession of our @CanadiansMTL at the final of the @Stanley Cup, we are working very hard on different scenarios that will allow CH fans to see the matches of the final, away and in complete safety. #polmtl 1/3

Plante said no plan could yet be officially announced, as public health approval is still needed.

“The enthusiasm for the final and a first Cup in 28 years would certainly cause large rallies, which are still not allowed by the authorities, despite having become a green zone,” she wrote.

On Monday, Montreal, along with the rest of the province, will be redesignated as having a COVID-19 alert level of green, the lowest level. However, this always comes with restrictions on the size of outdoor gatherings.

Plante said representatives of the Canadians told city hall officials that the team did not have the logistical and financial resources to organize screenings, so the city “continues to work with other partners to find solutions that will please fans while respecting the sanitary rules. “

A spokesperson for Groupe CH, the Canadiens ‘parent company, told CTV News the team will not be hosting a mass viewing of the Canadiens’ games against the Tampa Bay Lightning.

â€œIf the public health authorities approve these initiatives, we can facilitate this by providing contacts from different suppliers / stakeholders to the City of Montreal, as we have already done. But the Montreal Canadiens will not organize that because we have our hands full right now, â€they wrote in an email.

McKenna will not be running again; wants to spend time with her children, focus on fighting climate change