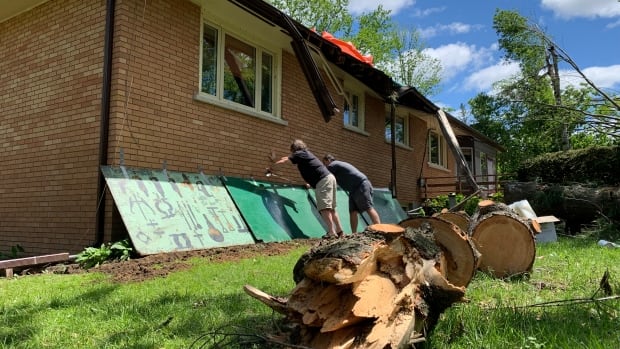 Cleaning underway in Ottawa a week after a powerful storm

City of Ottawa officials, residents and volunteers came out this weekend to clean up debris a week after a major storm tore through the area.

The cleanup comes as about 16,000 customers are still without power in pockets of the city, according to a Hydro Ottawa update Saturday night.

Hillary Faris, who lives in Nepean, said Saturday her home sustained significant damage as a tree smashed through the kitchen ceiling and ended up resting on her counter.

Faris said the front corner of his house as well as its foundation were badly damaged.

“We don’t really know to what extent yet,” she said. “We have lived in this house for 38 years and we have never experienced anything [like this].”

Simon Pierre Desjarlais, a master arborist with Arboris, Inc., says he’s going to be busy for months, given the influx of requests from governments and private insurance companies.

The affected area is “very large”, he said.

The mayor says he sympathizes

As the cleanup continues, many people continue to wait for power to be restored.

Shikharesh Majumdar, who lives in the Hunt Club neighborhood, said he was disappointed that it took Hydro Ottawa so long to reconnect him to the grid.

“Every night we hope that in the middle of the night the light will come on,” he said. “So I’ll keep the bedroom ceiling light on – it’ll be a nice surprise.”

Ottawa Mayor Jim Watson says he sympathizes with people who are frustrated that they still have no power a week after the storm.

“We thought we could restore electricity to almost 99% of the population in [Friday] at midnight,” he told CBC News Network on Saturday morning. “We haven’t met that target…we’re now at about 90 percent.”

Public works crews are clearing debris so that hydropower crews can enter, he added, calling it a team approach. In the meantime, respite centers across the city remain open, he said.

The city is also asking people to volunteer this weekend to help clean up.

While 90% of people have had their electricity back, Watson said many still had no internet service. He says he is trying to pressure internet companies to restore those connections.