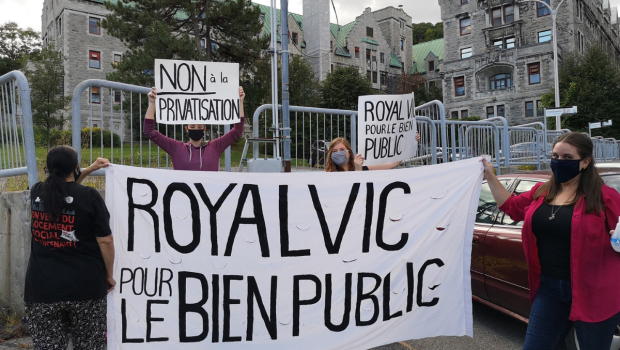 MONTREAL – A coalition of groups gathered in Montreal on Sunday in front of the former Royal Victoria Hospital site and began a march demanding that the iconic site “remain in the public domain, be managed in a democratic and ecological manner, and be used to meet the urgent needs of the people. “

The Royal Vic Coalition for the Public comprises five groups, including the Peter-McGill Community Council, the McGill University Student Society (SSMU) and the Milton-Parc Citizens Committee.

The coalition said in a statement that the September plan of the SociÃ©tÃ© quÃ©bÃ©coise des infrastructures (SQI) outlines heritage conservation, expanding green spaces and other principles, with which the coalition agrees, but it does would like more transparency on the future development on the site which climbs the side of Mount Royal.

â€œAlmost a year ago, we met to ask that the former site of the Royal Victoria Hospital remain in public property,â€ said Maryse Chapdelaine, member of the coalition. â€œEven today, it is not certain that the portion of the site occupied by McGill University is in the public domain.

She said the coalition remained “in the dark” about the management of the site.

“SQI and McGill University have made very little effort to include citizens and community groups in the process of developing the future project,” she added.

The coalition organized protests last year demanding that the Royal Vic be saved from privatization. They also point out that other health centers in the area could face an uncertain future such as the HÃ´tel-Dieu and the Institut des Sourdes Muettes, which are also unoccupied.