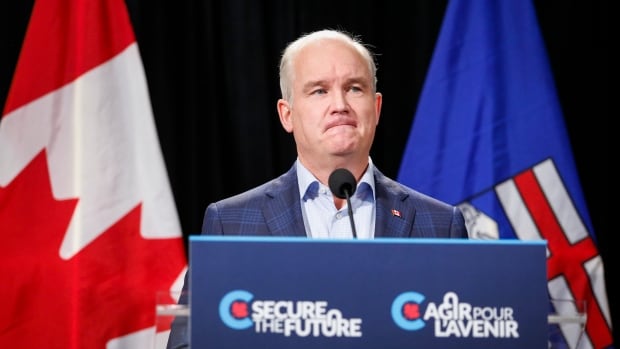 Conservative Leader Erin O’Toole has said his party will revamp the country’s fiscal stabilization program in what he calls a “first step to ending the mistreatment of western Canadians.”

The announcement in Calgary comes a day after the Prime Minister was in town to announce the final approval of a massive transit project in the city and to shoot his rivals. It is a sure sign that the parties are in electoral mode.

“Even though Alberta’s economy suffered from massive reductions in resource revenues, Albertans continued to pay more than their fair share to support the rest of the country,” O’Toole said in a statement Thursday.

“This is why a Conservative government will put in place the Fiscal Stabilization Program as a first step to ensuring that western Canadians are treated equally in our confederation.

The fiscal stabilization program aims to consolidate provincial finances in the event of a sudden drop in income.

The proposal would give Alberta $ 4 billion in rebates, according to the Conservatives, leaving $ 1 billion for the rest of the country.

The point of the program

The issue of fiscal stabilization has been a source of persistent complaint for the current Alberta government, which has argued that the formula needs to be reviewed. He says the province lost billions of dollars in revenue as the price of oil fell and the government’s bottom line followed.

The recent changes introduced by the ruling Liberals have not satisfied the province.

Fiscal stabilization was one of the factors that led to the creation of the Alberta Fair Deal Expert Panel, which made recommendations on everything from the province establishing its own police force and its own. pension fund to the holding of a referendum on equalization payments within the federation.

“Today our country is facing a national unity crisis,” O’Toole said at an afternoon press conference. “A crisis fueled by Justin Trudeau and his government’s contempt for western Canadians here in Alberta.

What O’Toole mostly avoided was any discussion of equalization payments, arguably a more central sticking point for the Alberta Conservatives. He only said that a Conservative government would make the process more transparent and fairer.

Duane Bratt, a political scientist at Mount Royal University in Calgary, said it was probably voluntary.

Bratt points out that the stabilization program is just that, a program, but equalization is written into the constitution.

Support for the energy industry

It was not just the fiscal stabilization program that the Leader of the Opposition proposed on Thursday.

O’Toole said the Conservatives will devote more energy to supporting the oil and gas industry, lifting the ban on tankers on the B.C. coast, making changes to environmental impact assessments and establish a national LNG export strategy.

“As Albertans, I don’t need to tell you that the left-wing parties want to phase out the energy sector and the hundreds of thousands of working Canadian families who depend on it,” he said. declared.

“The Conservatives will treat the energy sector as a key driver of the Canadian economy and leverage our global leadership in environmental and social governance as a competitive advantage to secure our future.

The Conservatives have always won the majority of seats in Alberta and the province is considered the heart of the Conservative movement in Canada.

Lately, however, some cracks have started to appear in this dominance. United Conservative Party Premier Jason Kenney languishes in the polls alongside the federal leader.

“I am very proud of our team here, and I believe that not only will we keep our seats every time an election is held, we will go after the last one,” O’Toole said when asked what his positions were. chances in Alberta. Currently, the Conservatives hold 33 federal seats in Alberta and the NDP holds one.

When asked why he believed the Conservatives would get more support in Alberta, O’Toole replied, “Because I don’t see anyone in this province who hasn’t seen the attack on prosperity in Alberta. Alberta, against its way of life, which was led by Justin Trudeau from his first minutes in power. “