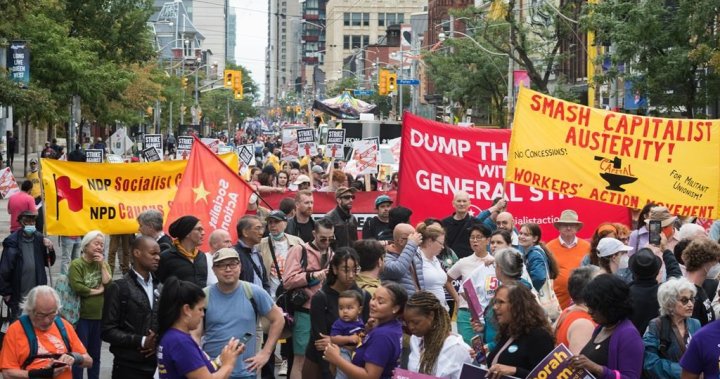 A record labor shortage and rising wages may sound like good news for workers, but union leaders say employees aren’t seeing the gains companies are seeing amid skyrocketing inflation.

The year-over-year inflation rate in Canada was 7.6% in July, while wages rose 5.2% over the same period.

Canadian grocers continue to rake in exorbitant profits, but does that amount to “greed”?

Tackling this imbalance, she says, is one of the priorities of the labor movement going forward.

“It’s about making sure we actually respond to the affordability crisis by tackling inflation and asking governments to look at the gigantic profits many employers are reaping right now,” Bruske said. .

The NDP has urged the federal government to extend the windfall tax levied on financial institutions to oil and gas companies, as well as big-box retailers.

But some economists are weary of windfall taxes, fearing they will scare away business investment.

According to an analysis conducted by David Macdonald, senior economist at the Canadian Center for Policy Alternatives, after-tax corporate profits reached a historically high percentage of the total output of the Canadian economy in the second quarter of this year.

In contrast, Macdonald found that workers’ compensation as a share of gross domestic product was trending downward, falling to the lowest level since 2006.

“It’s pretty clear that we’re seeing record profits and a record proportion of our economy is going to after-tax corporate profits rather than worker wages,” Macdonald said.

The economist says the current windfall tax is “very limited” and suggests extending it to the entire business sector.

Ottawa and District Labor Council President Sean McKenny says some businesses have undoubtedly been impacted by the COVID-19 pandemic, but seeing some companies’ high profits has been frustrating for workers.

“It bothers workers in general because, again, the fairness isn’t there,” McKenny said.

An Invitation to Ottawa Municipal Candidates