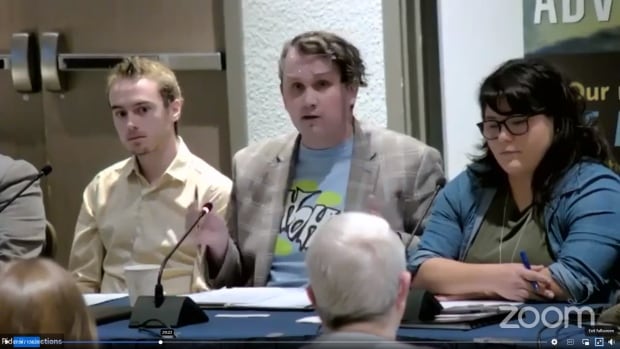 Revitalizing downtown and providing additional social programs for the homeless population were topics discussed at a business forum for city council candidates on Friday.

All 16 candidates attended the event hosted by the Yellowknife Chamber of Commerce at the Explorer Hotel on Friday evening.

The state of downtown was discussed after candidates were asked how they would make the area more attractive for business investment and how they perceived the intersection between homelessness and public safety.

Candidate Cat McGurk took issue with the wording of the question.

“If we take the conversation about downtown revitalization seriously, we also need to understand our contribution to the social fabric,” she said.

Steve Payne, an incumbent, said one solution may be to take advantage of available federal funding for additional programs.

Rommel Silverio, another starter, said the problem was “not easy” to solve. He said when he first ran for council he was ideological, but realized how difficult issues like homelessness are.

Life after the mines

With the impending closures of the Diavik Diamond Mine and the Ekati Diamond Mine, candidates were asked which other sectors of Yellowknife’s economy they saw as the most promising.

Garett Cochrane said mining cannot be replaced, but smaller projects can help. He said there should be worker camps established so that the construction industry can develop.

McGurk said some low hanging fruit would include the fishing industry which can be developed with the port strategy. She said the art economy is another area that can grow.

Dwayne Simmons said tourism is a big opportunity, and one way to do that is to impose a lodging tax — a small fee added to the cost of staying at a hotel or Airbnb that travels to town.

“This specific hotel tax is something the city should prioritize,” Simmons said.

Candidates were also asked what could be done to put more industrial land on the market to turn into retail or housing.

Rob Warburton said the city is doing what it can right now because there is very little land for development in the city. He said the city’s decision to sell the 50/50 downtown lot for $1 to develop was a good move because developers are risking a lot when undertaking projects like this and the need for housing is tall.

Warburton said land transfers from the territorial government would benefit the city as a whole.

This is public land owned by the territorial government that will be transferred to the city, which will facilitate development. But Warburton said it takes a long time and should be a priority for the next council.

“It’s gotta put some fire down there,” Warburton said. “We need land and we need it soon.”

The last question was about the labor shortage faced by almost all employers in the city.

Another solution that several candidates, including Tom McLennan, discussed was to make the city more affordable and attract more residents to increase the workforce.

“I always brag to my friends down south about how great it is to live here, I think we all need to do this and I think the city needs to do this to attract more people,” said McLennan.

RED and BLACK against ALS: “It’s us against them… and I take us every time”