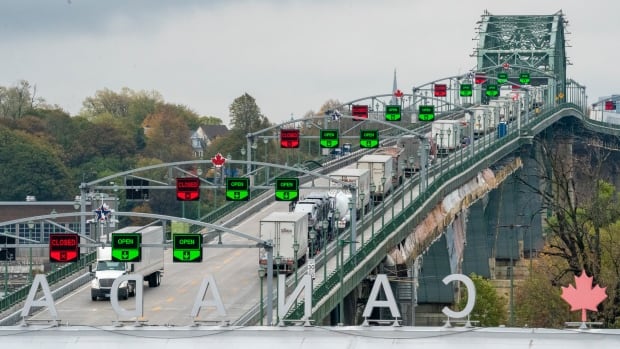 The federal government risks hitting Canada’s fragile supply chains with yet another shock wave if it issues a planned vaccination mandate for truckers, say conservatives and industry groups.

Ottawa will begin requiring proof of vaccination for all truckers effective January 15.

Some warn the mandate will sideline thousands of workers in an industry that already suffers from a shortage of drivers.

“There will be serious consequences for the supply chain if this policy remains in place,” said MP Melissa Lantsman, Conservative transport critic.

“I don’t quite understand how [the Liberals] have failed to give Canadians and industry the reassurance they need that the situation will not worsen. “

Lantsman sent a letter to Transport Minister Omar Alghabra this week asking his government to do more to support the trucking industry if the mandate is introduced as planned.

Global supply chains have been strained throughout the COVID-19 pandemic, resulting in widespread delivery delays and shortages of certain products.

Those worried about the government’s plan to require vaccines for truckers say the loss of more drivers could threaten the movement of essential supplies, like food and building materials, and make it difficult for small businesses to deliver their products to customers.

The Canadian Trucking Alliance (CTA), the Canadian Chamber of Commerce and Canadian Manufacturers and Exporters have all called on the federal government to eliminate or postpone the mandate.

The Liberal government has not indicated its intention to change or delay the mandate.

Industry could lose tens of thousands of drivers

The CTA estimates that about 10 to 20 percent of Canadian truckers – between 12,000 and 22,000 workers – will be forced out of their jobs when the mandate is implemented.

The loss would worsen the plight of what the group describes as a struggling industry. Canada was already facing a shortage of 20,000 drivers in the spring of 2021.

Stephen Laskowski, chairman of CTA, said further losses would disproportionately hurt small businesses that don’t have the money or the ability to get trucking services in a market with fewer available drivers.

“Some sectors of the economy may have little disruption,” he told CBC News. “Others who can’t be so competitive… will see more effect.”

The CTA estimates that about 70 percent of the $ 650 billion in trade between the United States and Canada is by truck.

Truckers who are not vaccinated will not be allowed to cross the border into Canada from January 15th.

Perrin Beatty, president of the Canadian Chamber of Commerce, said the disruption caused by the mandate will eventually be evident across the country.

“We will see shortages of merchandise in stores,” Beatty said.

“No excuse” not to be vaccinated

Laskowski said vaccination rates in the trucking industry largely mirror those of the broader Canadian population.

According to CBC News data, 80.6% of eligible Canadians received two doses of a COVID-19 vaccine, while 86.9% received at least one dose.

Laskowski said vaccination rates vary widely from one trucking company to another, with some reporting rates close to 100 percent and others reporting rates below 50 percent.

In his letter to the government, Lantsman said truckers who work alone in their vehicles pose a low risk of transmitting COVID-19. Some health experts say, however, that truckers traveling long distances across the continent could end up unintentionally transporting the new coronavirus.

“With the growing variant coming on, there is no excuse at all not to be vaccinated,” said Timothy Sly, epidemiologist and professor emeritus in the School of Occupational and Public Health at Ryerson University.

In an email to CBC News, Alghabra’s office did not respond to a question about the warrant and whether it could be changed.

“Our government is committed to continuing to work collaboratively to find solutions to the logistical challenges that have emerged since the start of the pandemic,” a spokesperson wrote.

First homicide of 2022: a routine call leads to the discovery of the body inside a…