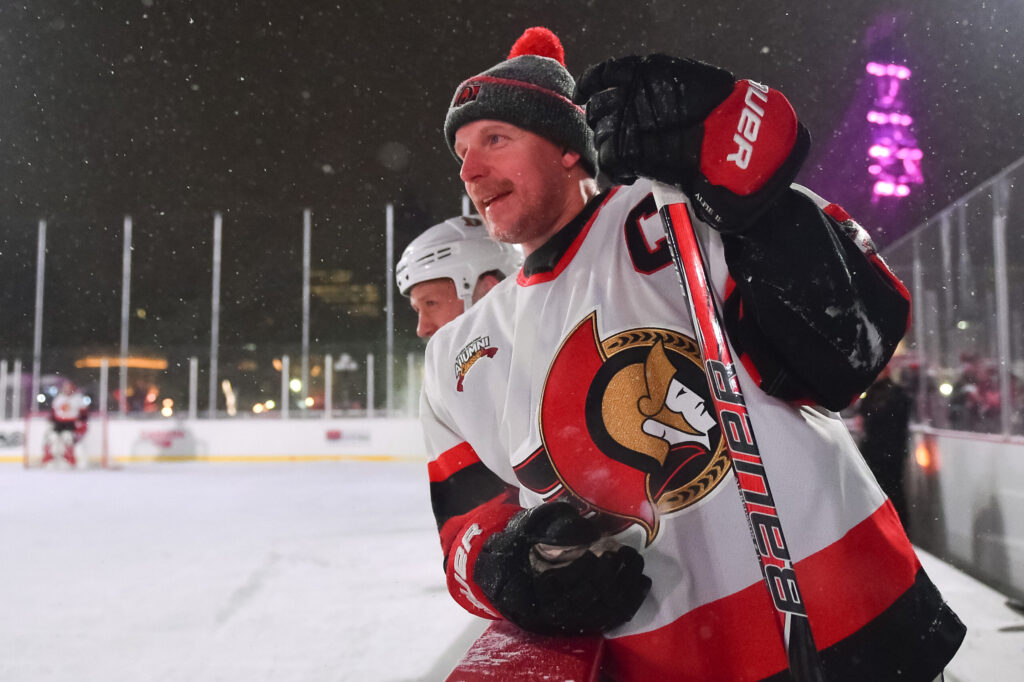 You’ll excuse Daniel Alfredsson for thinking another year was about to go by without him getting a congratulatory phone call from the Hockey Hall of Fame.

After being knocked out of the entree four times in a row, the former Senators captain had grown accustomed to the radio silence of the selection committee.

“I actually thought I wasn’t going to get the call,” Alfredsson told reporters on a conference call from his home in Sweden. “It was after 8 p.m. local time, but I thought it wouldn’t happen again this year.”

Instead, Alfredsson was pleasantly surprised when his wife Bibbi answered a phone call on his behalf on Tuesday evening – only to find it was Lanny McDonald and Mike Gartner on the other end.

In a moment that was captured on video by the Hall of Fame, the conversation began with a lighthearted moment.

“If it wasn’t Hall of Fame, wouldn’t you take the call?” McDonald asked.

“I thought it was my insurance company calling,” Alfredsson joked.

But moments later, things got serious when Gartner officially announced to Alfredsson that he would be inducted into the Hockey Hall of Fame Class of 2022.

Upon hearing the news, the first words that came out of Alfredsson’s mouth were, “I can’t tell you how much this means. Not just for me, but also for the city of Ottawa.

The fact that Ottawa was a priority for Alfredsson – even though he was an ocean away in Sweden – says a lot about his deep connection with this city and its fan base. Few athletes have forged the kind of connection Alfredsson has with the city of Ottawa, with roots much deeper than hockey.

“When you retire, it’s even more special to be able to have the connection that I had with the city and the fans,” Alfredsson added on Tuesday. “Even after my playing days, it means a lot to me. I think a lot of Senators fans today are also happy to see me get that recognition. And they’re a big part of that.

But it often feels like the greatness of Ottawa’s players is confined to area code 613, with Senators fans constantly having to justify their attributes to fans and critics in outside markets. In many ways, Alfredsson was the epitome of Ottawa when he captained the Senators. He was quiet, modest, hard-working – and criminally underestimated by outsiders.

And so, when Alfredsson was consistently overlooked for the Hall of Fame, Senators fans took him as yet another example of how the franchise is often seen as a “little brother” to other Canadian franchises. Even though many of Alfredsson’s professional accomplishments went quite well against Mats Sundin and the Sedin twins, those players were considered Hall of Famers in the first round, while the Senators captain had to show patience until his time comes.

(Alfredsson, by the way, provided a long intro video for sundin hall of fame induction ceremony in 2012. It would be a very good idea to see Sundin return the favor for Alfredsson’s ceremony in November.)

Alfredsson had been ignored in every vote since 2017, with the Hockey Hall of Fame’s murky selection process shedding little light on their reasoning. But as news of Alfredsson’s induction spread Tuesday, the city of Ottawa exploded in jubilation, dispelling all the cynicism that had been attached to his Hall of Fame bid. It may have taken five years, but it finally seemed like the Hall of Fame selection committee was able to see Alfredsson through an Ottawa lens — understanding his massive impact on that city.

The news even made it to France, where former Senators team president Cyril Leeder is currently on vacation. In a social media post, Leeder revealed he was 6,000 feet in the air on a hot air balloon when he learned of Alfredsson’s Hall of Fame induction. He quickly asked for the balloon to land, so he could open a bottle of champagne and celebrate the moment on the ground.

“When I heard the news I had tears in my eyes. I was so happy for Daniel and his family,” Leeder said. Athleticism by text on Tuesday evening. “He’s done so much for the team on the ice and so much for the community off the ice. And he did it the right way – with hard work and humility. He never sought the limelight or the accolades, he just did the right thing every time. He is very classy and truly deserves the Hall of Fame selection.

“To be recognized in this way is truly humbling,” Alfredsson added on Tuesday. “It’s a great honor and a special day. You don’t think about that when you play the game. It’s not one of your career goals. But when you’ve retired and look back on it, it really means a lot to be around the other great players in this great sport.

The #AlfietotheHall hashtag has exploded on Twitter in recent days, with the Ottawa Senators‘ official social media channels helping to amplify the message. The Senators’ adoption of Alfredsson’s Hall of Fame bid was a stark departure from their previous stance on the issue, in which they completely ignored their former captain’s candidacy.

Craig Medaglia — who once ran the Senators’ social media accounts — was also part of the “Alfie To The Hall” group. And Medaglia believes the Senators’ silence on the matter over the past four years has been a factor in Alfredsson being overlooked.

“In the past, it almost instantly knocked him out of competition. If he doesn’t have the support of the organization where he’s played 95% of his career, he probably shouldn’t go,” Medaglia said. “It needs to be celebrated to such an extent that if the team isn’t on board, it makes no sense to put it in.”

Group ‘Alfie To The Hall’ says their tweets have garnered more than 2.5 million impressions in the past two weeks, with their hashtag reaching 20 million users. The group is quick to point out that Alfredsson didn’t enter the Hall of Fame as a direct result of their aggressive social media campaign, but they believe they helped streamline things into a singular, cohesive message. .

“The role we played was probably different from what people think. The role we played wasn’t so much to prove he was worthy of the Hall of Fame,” Medaglia explained. “It was more about organizing everyone under one banner. People needed to know where to direct their energy. Organize everyone.

Still, the group may have played a key role a few months ago when it officially submitted a nomination for Alfredsson’s candidacy directly to the Hockey Hall of Fame. Using a little-known clause that allows members of the public to make an impassioned pitch to have their favorite hockey players inducted into the Hall of Fame, Ottawa fans Stephen MacDonald and Corey Meehan did just that on behalf of Alfredsson.

“What do Ottawans love more than looking at a rule book to see what’s allowed and what’s not? If there’s a city that’s built to understand the bureaucracy of things, it’s Ottawa,” MacDonald said.

So they prepared a detailed dossier and submitted it to the Hockey Hall of Fame, making sure to meet the March 15 deadline. They received confirmation that Hall officials had received their electronic package – Meehan also personally delivering 20 hard copies to the Hall of Fame in Toronto so that each member of the selection committee had access to their own file. In the absence of a strong push from the hockey club, this group felt that a direct, grassroots approach presented the best opportunity to sway voters in favor of Alfredsson.

The package touted Alfredsson’s Hall of Fame credentials – how he ranked 34th all-time in adjusted points at the time, how he finished fifth in the NHL in points (1,157) during the 18-year window that he played in the league. And they made sure to point out how many recent inductees — such as Sundin, Eric Lindros, Jarome Iginla and Paul Kariya — also haven’t won a Stanley Cup in their careers.

During his press conference on Tuesday, Alfredsson was asked directly about the campaign and the role they played in his consecration finally coming to fruition.

“To be honest, I have no idea,” Alfredsson replied. “I’d like to think it was my playing career that made them choose me, but it’s really special to have the support of the group that put this bid together.”

On several occasions on Tuesday, Alfredsson went out of his way to highlight his relationship with Ottawa fans. It’s clear that any residual acrimony or bitterness from his sudden departure to Detroit in the summer of 2013 has completely evaporated. And when her induction day rolls around in November, the memories that come flooding back will all be positive.

His iconic goal to ultimately propel the Senators to the Stanley Cup in Buffalo.

The improbable shorthanded goal tie a playoff game against Pittsburgh.

Or his efforts to shine a light on mental health issues — long before it was a topic of mainstream discussion.

“It’s really special with the support I’ve had from Ottawa. Throughout my career, from 1995 to now, they really supported me and tried to get me into the Hall of Fame,” Alfredsson added. “They’re behind me all the way.”