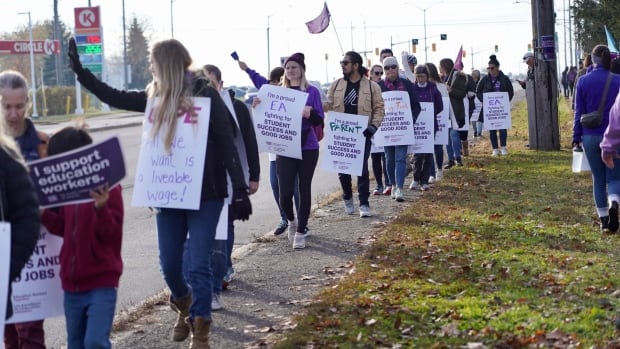 Education workers gathered on picket lines across Ottawa on Friday morning, including at the offices of Progressive Conservative MPs, to express their displeasure at the idea that the province is imposing a contract on the Canadian Union of public service (CUPE).

The union says low pay and general job dissatisfaction are at the heart of the protests.

They gained a new political dimension this week when the Progressive Conservative government imposed contracts on 55,000 education workers and banned them from striking.

Despite the invocation of the notwithstanding clause – which allows Parliament and provincial legislatures to strike down parts of the charter – CUPE chose to protest anyway, racking up up to $220 million in fines a day.

Workers expressed their frustration outside the office of Progressive Conservative MP Lisa Macleod, not only over their desire for a pay rise, but also over their feeling that their democratic rights had been trampled on.

“I used to think we lived in a democracy, but now I’m not so sure,” said Alison Moy, an office administrator who is now on strike.

“I don’t know any [educational assistants] who don’t have a second job because they just can’t afford to live on our salary,” said Helen Fiset, who was standing next to her.

“We’re just asking for a fair rate of inflation relative to what things cost.”

Two Ottawa education workers and a parent said they are fighting for what they think CUPE workers deserve.

By 8 a.m., about 50 workers and parents had already gathered at the Macleod constituency office, which had a sign on its door saying the office would remain closed on Friday.

“My second job paid for this sign,” read a sign held by protesters. “We deserve a fair deal,” read another.

Eight of 12 school boards in Eastern Ontario have switched to online learning, with the other four saying their plans would vary if the strike continues next week.

Education workers on the picket line include librarians, caretakers, teacher aides and those who work with medically fragile children.

In a statement released early Friday, Education Minister Stephen Lecce said the ministry had already filed a complaint with the Ontario Labor Relations Board in response to the “unlawful strike.”

“Nothing matters more right now than getting all students back to class and we will use every tool at our disposal to do so,” the statement said.