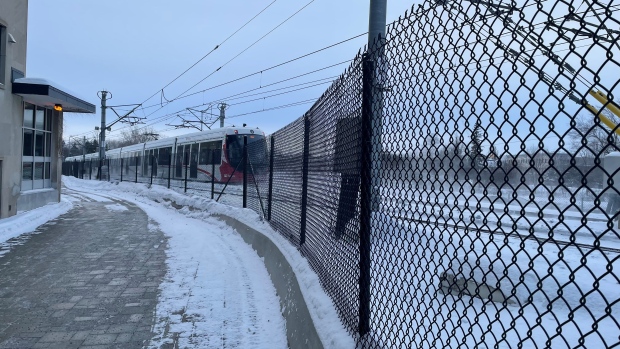 The arm that connects the train to overhead power lines will be replaced on four vehicles before they return to service following the disruption on Saturday.

OC Transpo provided an update on the investigation into issues with the Confederation Line over the weekend. Five trains came to a standstill early Saturday morning in the east after suffering a power outage on the eastern part of the line.

In a memo to council on Wednesday afternoon, chief security officer Duane Duquette said the initial investigation found the long period of cold temperatures had affected the overhead power line.

“In further analysis carried out after repairs were made to the line, it was found that this condition had caused damage to the pantograph – the arm that connects the train to the catenary line to provide power – on four light rail vehicles,” Duquette said. .

Duquette says all necessary repairs and inspections were carried out on the track on Saturday, before returning to service on Sunday.

“The pantographs of all four vehicles are replaced before they are returned to service,” Duquette said.

The pantograph damage prompted OC Transpo and Rideau Transit Maintenance to report the incident to the Transportation Safety Board.

“The TSB has been notified. No further action is planned,” Duquette said.

“The City and RTM will further review this incident for any corrective action or process that may be required.”

Toronto guitarist-songwriter James Brown returns to recording after a hiatus of more than a decade on ‘Song Within the Story,’ out March 18 on NGP Records | News