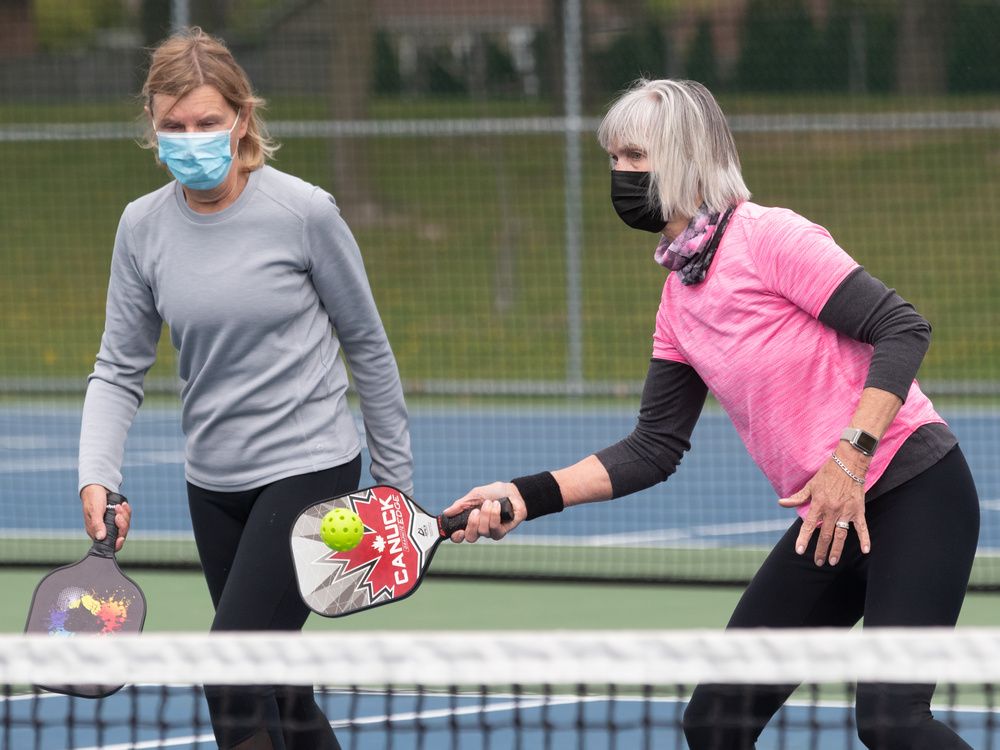 Postmedia may earn an affiliate commission on purchases made through our links on this page.

Claiming to be the fastest growing sport in North America, pickleball outpaces most other sports.

A 2022 survey by Pickleball Canada showed the number of players has tripled in two years, with 8% of Canadian households reporting that at least one household member plays pickleball once a month. This translates to approximately one million Canadians playing pickleball, 45% of whom play four or more times per month.

Baby boomers were among the early adopters of the sport, although the number of 18 to 34 year olds playing the game is steadily increasing. With fun and fitness often cited as the reason so many people bought a racquet, it’s worth knowing how hard you train during a game of pickleball.

A hybrid of tennis, badminton, and table tennis, pickleball is played on a 6.10 by 13.41 meter (20 by 44 ft) court, with the majority of recreational players preferring doubles to singles. It’s a smaller court than tennis so pickleball players don’t have as much ground to cover. This makes it a great game for people who have slowed down a step or two over time. But due to the newness of the sport, there are only a few studies that have investigated how pickleball contributes to overall fitness.

A team of American researchers from Western State Colorado University equipped eight women and seven men aged 40 to 85 with wearable units designed to determine the amount of energy they expend during a game of pickleball. They also took a before-and-after snapshot of their cardiometabolic health to see if pickleball had a positive effect on their fitness and health after six weeks of regular play.

A group of researchers from Brigham Young University in Idaho looked at the physiological demands of the game, hoping to find out how 30 minutes of doubles pickleball compares to 30 minutes of walking. They gathered 25 pickleball players (15 men and 10 women) with an average age of 38 and fitted them with sensors to measure heart rate, step count and calories burned while walking and playing pickleball.

Both studies confirmed that pickleball is a legitimate workout. The Picklers in the Western State Colorado study recorded an average heart rate of 108 beats per minute and burned 353.5 calories per game, which is considered moderate-intensity training.

The 15 men and women also improved in health and fitness during the study which required them to play one hour of pickleball a day (about four doubles matches).

“After six weeks of pickleball participation, there were significant improvements in the following outcomes: high-density lipoprotein (HDL) and low-density lipoprotein (LDL) cholesterol, systolic and diastolic blood pressure, and maximum oxygen,” the researchers said. .

When it comes to the comparison between pickleball and walking, subjects in Brigham Young’s study recorded 14% higher heart rates and 36% higher calorie expenditure while playing pickleball than while walking. They said pickleball was more like training than walking.

However, when it comes to step count, a 30-minute walk had 54% more steps than a doubles match. The smaller pitch, the proximity of teammates on the same side of the net, and much of the play taking place at the net means that fewer steps are accumulated during a match.

Interesting as these statistics are, they come with a caveat: Researchers in the western state of Colorado noted considerable variability between subjects, with certain heart rates indicating that individuals perform well in the range of what is considered vigorous intensity training. It is also likely that some people play at the other end of the intensity range, with lower energy expenditure than the average pickleball player.

Subjects in Brigham Young’s study viewed pickleball as more fun than walking, a sentiment that was echoed by respondents to the Pickleball Canada survey. Sixty-two percent of respondents said the main reason they play pickleball is because it’s fun, a number that rose to 89% among baby boomers.

This sense of fun is driving the increase in participation in pickleball leagues and on neighborhood courts across the country. When fun and fitness take equal center stage, not only will participation increase, but membership will also increase. People will come back more often to have fun than to exercise. The social aspect of the game is also important among Canadian picklers. Thirty-eight percent of survey respondents said this is what keeps them in the field.

All of this is good news for Canadian pickleballers spending their summers on the courts. They are having fun in the sun and getting in great shape.