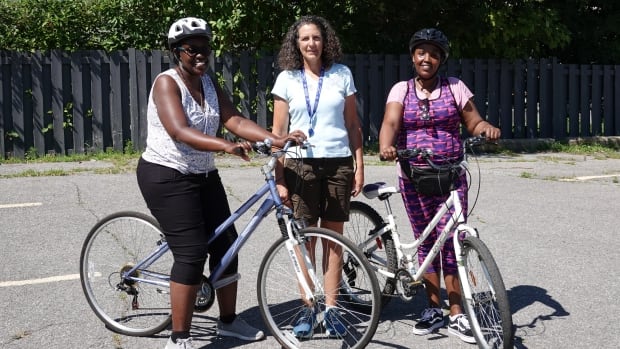 Before this summer, Claire Kiruhira had never ridden a bike.

Now, after three lessons, she is comfortable doing 20-minute trips on two wheels.

Kiruhira, who is from Uganda and immigrated to Ottawa in February, says that besides exercise and fun, knowing how to ride a bike is a practical skill that makes shopping easier for her.

“It’s very interesting at my age to sit on a bike,” said the 37-year-old mother of three. “I love it and I’m very grateful for it…And I encourage other people to come, other ladies to come and learn.”

She attributes her progress to cycling instructor Denise Inglis.

Inglis is the coordinator of the non-profit Vélo Vanier, which lends free bikes to residents and has started offering mom-friendly classes.

“The previous coordinator found that families came to lend bikes and often mothers did not take bikes. And when she started asking them, she found that many of them did not know how to ride a bike. They had never had the opportunity to learn,” Inglis explained.

The women start out on bikes that don’t have pedals, they push with their feet and just steer with the handlebars.

“I have my methods. They work,” Inglis said. “We learn to balance first. And then once you can balance, the pedaling part is easy.”

Kiruhira took evening classes with Christine Uwamwezi, whose three children have yet to see her ride.

“Our children know how to ride a bike [and say], ‘we don’t want to see mom fall.’ That’s why we prefer to cycle late,” said Uwamwezi.

Uwamwezi, who immigrated to Ottawa in March, rode a bike as a child in Rwanda but hasn’t ridden two wheels since.

“In our country, there is a culture that says cycling is for children. So I rode a bike when I was a [child] when I [went] in primary and secondary school. After that, when I grew up, I said ‘no, the bike is for children'”, says the 47-year-old man.

After arriving in Canada, Uwamwezi noticed women riding bicycles. When it came time for her children to start horseback riding, she too was excited about the idea.

“It’s a great experience. And it takes the stress away because me and Christine do it late at night at 8 p.m. when the sun isn’t out. And we really enjoy what we’re doing,” Kiruhira said.

At the end of the summer, the group hopes to take a bike ride and have a picnic.

“I would try to imagine what my life would be like if I didn’t know how to ride a bike. So to be able to show that to someone and see how it can change their life is really fun to do” , Inglis said.