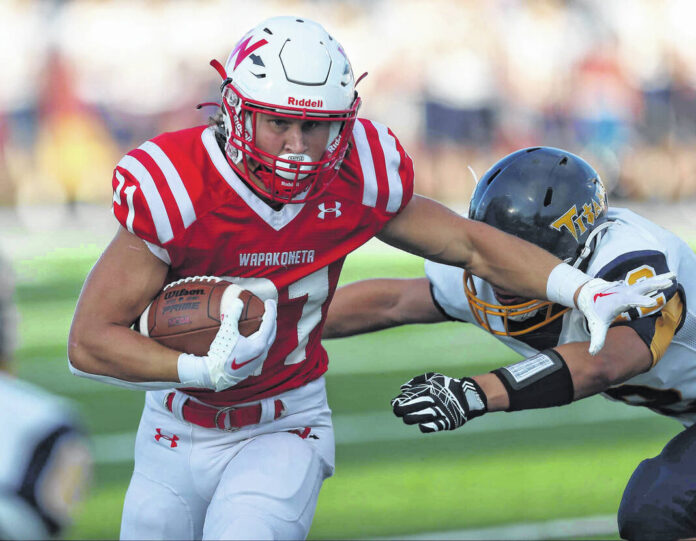 SWAPAKONETA – At first it looked like a possible eruption.

However, the Titans responded.

After the Redskins took a 14-0 lead in the first quarter, the Titans fought back.

At halftime, Wapakoneta led 14-7 in a Western Buckeye League opener at Harmon Stadium on Friday night.

After OG (0-1) was forced to punt, the Redskins recovered the ball at OG’s 25-yard line.

Five plays later, running back Connor Meckstroth threw it one yard for the touchdown. With the point after by Preston Meyer, Wapakoneta led 7-0, just over three minutes into the first quarter.

Wapakoneta scored on his second possession of the contest.

This scoring campaign for the Redskins took just four plays to cover for 56 yards. Meckstroth capped the score with a 1-yard TD run. With the PAT, Wapakoneta led 14-0 with 5:56 left in the opening stanza.

OG entered the scoreboard with 2:08 left in the first quarter.

OG quarterback Landon Morman found Carter Duling open for a 17-yard strike to bring OG back under 7. That goal run for the Titans was set up by an interception from Duling (linebacker) that put the ball on Wapakoneta’s 38-yard line.

In the first half, Wapakoneta’s offense racked up 150 total yards.

OG’s offensive unit recorded 100 total yards in the first half.

Wapakoneta junior running back Jace Knous had 57 yards on 10 carries in the first half.

Wapakoneta freshman quarterback Caleb Moyer was 4-for-4 with 72 yards in the first half.