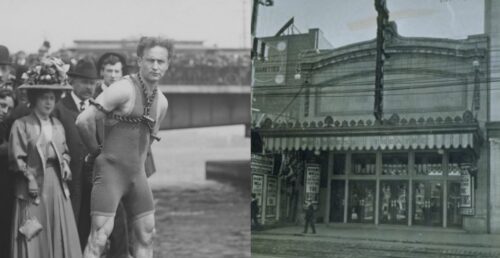 Although he’s been gone nearly 100 years, most people know at least a thing or two about Harry Houdini. From his legendary illusions to his thrilling escapes from handcuffs, water tanks and straitjackets, the Magic Man’s name is synonymous with mystery.

Sadly, so is his death.

In order to understand what really killed the illusionist and how Montreal played a central role in his downfall, we have to start at the beginning.

Houdini, was born Erik Weisz in Budapest in 1874. Upon arriving in America as a child, Weisz became infatuated with the work of French illusionist Jean-Eugène Robert-Houdin, so much so that he adopted the name ( with an added vowel) as its own. As a teenager, Weisz was already performing stunts and stunts under his new stage persona.

In the early 20th century, Houdini roamed Europe and quickly became a household name around the world. Over the next two decades, he rose through the ranks of magic through death-defying stunts, escapes, and theatrical performances.

In the mid-1910s, Houdini became president of the Society of American Magicians. He also tried his hand as a movie star and writer. Around this time, Houdini struck up a friendship with Sir Arthur Conan Doyle, the author behind Sherlock Holmes. Doyle introduced Houdini to his love of spiritualism and his deep belief in the supernatural.

But after attending several (often disguised) seances and meeting countless spiritualists, Houdini developed a strong disdain for the fraudulent nature of the practice. And as an illusionist himself, he was able to quickly identify a trickster when he saw one. By the 1920s, debunking these spiritualists had become Houdini’s primary focus. He has co-authored several books on the subject and even incorporated them into his new show called “Three Shows in One: Magic, Escapes, and Fraud Mediums Exposed”.

Despite his injuries, the magician, now in his fifties, continues to tour and perform. It was also common for him to lecture on demystifying spiritualism at educational institutions along the way.

In October 1926, Houdini was in Montreal to perform at the Princess Theater on Sainte-Catherine Street. During his brief stint in town, Houdini visited McGill University to give a presentation on his recent debunking of a Boston news outlet.

According to McGill records, after the presentation, at least two students came to visit him in his dressing room: Jocelyn Gordon Whitehead and Samuel J. Smilovitz, who decided to sketch Houdini. During the meeting, Whitehead wanted to challenge Houdini’s strength and asked if claims that the magician was able to absorb blows were true. Houdini apparently agreed, but before he could prepare, the student punched him three times in the stomach.

Whitehead’s damage to Houdini’s stomach appeared to aggravate a pre-existing (undetected) case of appendicitis. Houdini, no stranger to discomfort, overcame the pain and performed in Montreal despite failing health. As the pain persisted and worsened, Houdini declined a proposed trip to the hospital.

A few days later, he collapsed on stage in Detroit and was eventually sent to the hospital. Although Houdini, who had a fever of 104°F, had hours to live, he held his own for about a week until he finally succumbed to the infection. Houdini died on Halloween, a day that many people deemed appropriate for the magician and larger-than-life figure.

Although he did not die in Montreal, contrary to popular belief, it was the city where Houdini met his unfortunate fate.