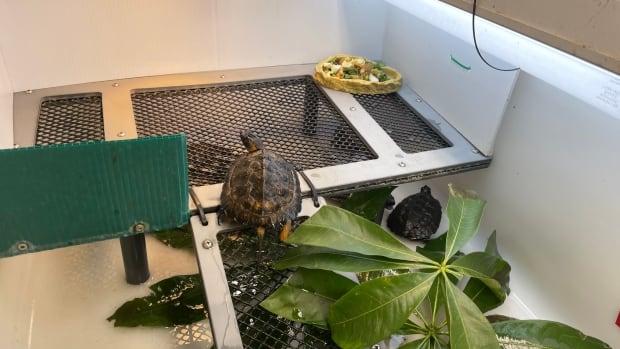 It’s a journey that begins at the Montreal Biodôme and ends in the green embrace of the Quebec wilderness with the goal of saving a species that can use all the help it can get to thrive again in its natural habitat.

Since 2014, more than 200 wood turtles have been released into the wild. The reason is simple: with the species at risk, the Ministry of Forests, Wildlife and Parks of Quebec wants to help increase its survival rate.

Thus, turtles are hatched and raised in a place where they are safe from predators, bad weather or anything that could shorten the life of a young turtle.

“We are trying to increase their survival rate so that after a year or two – once that critical period has passed – we can put them back into the wild and hopefully they will do well,” Daghfous said. .

Along with carefully incubating the eggs and waiting for them to hatch, pet sitters like Linda Paetrow need to make sure the little turtles are eating properly.

“On even days, we give them a tray of fruit and vegetables with a little egg or banana. And then on odd days we give them earthworms that we cut up for them to make them easier to eat. “, explains Paetrow.

The trick was to keep track of each turtle to make sure they are healthy and gaining weight.

“We have a system where each scale on the back of their shell is assigned a number. And then we run a thread of a certain color through one of those scales,” Paetrow said.

The wire helps workers track the progress of each turtle. They will give each turtle a name and monitor its health.

This system has become practical. Staff noticed that a turtle had recently lost five percent of its body weight and was swimming a bit on its side. This could indicate a pneumonia infection, so he was put on antibiotics and hand-fed, Paetrow said.

“She’s put the weight back on and she’s doing great now,” she said.

Release young turtles into the wild

Once the turtles are finally out in the wild, they are first put in a cage outside to adjust to their new surroundings.

Paetrow said the wood turtle spends more time on land than any aquatic turtle in Quebec, and that can put them at risk of being run over by cars or even poached by people “because it’s a very beautiful animal.”

Mélanie Roy knows only too well the risks that turtles face when they travel on land. She is a biologist with a non-profit conservation organization called Appalachian Corridor which operates in southeastern Quebec.

Earlier this summer, in the space of just a few days, Roy spotted five dead turtles that had been hit by cars. One of them was carrying eggs.

“It’s a topic that breaks my heart,” she said.

Roy said citizens should report any turtle sightings to the carapace.ca website and take a photo of the animal, to help biologists identify problem areas for turtles.

She said people should stop and help the animals if it is safe to do so. One way to help, she said, would be to act as a traffic controller and let other drivers know about the turtle.

If the danger of crossing is imminent, Roy said people can pick up the animal and move it. But they must do it with gloves, only touch the back of the shell and above all, always cross in the direction the animal is heading.

Earlier this year, the Nature Conservancy of Canada (NCC) announced the protection of two critical habitats, covering some 115 hectares, for wood turtles at risk in the Mauricie region.

Both sites are part of an ecological corridor that connects them to surrounding Wood Turtle habitats, including La Mauricie National Park and other areas protected by NCC.

“Protecting wood turtle populations is critical to overall ecosystem health. These reptiles act as guardians of wetlands, eating dead plants, insects and animals, helping to clean up the ecosystems around them” , the NCC said in a press release in May.

“With a lifespan of over 50 years and their characteristic quiet manner, wood turtles are known to take their time finding the perfect spot to lay their eggs – sometimes exploring a site for days before deciding to a nesting place.”