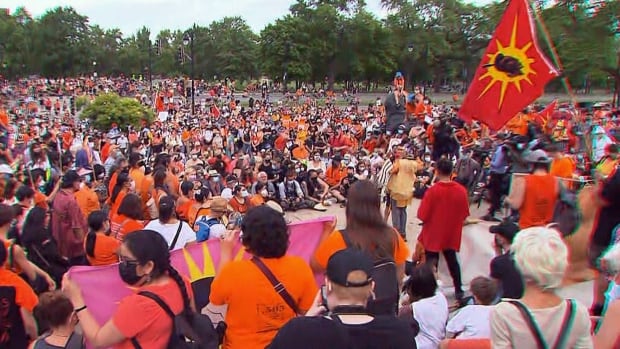 Hundreds of people gathered Thursday in Jeanne-Mance Park in Montreal, not to celebrate Canada Day, but rather to denounce the legacy of Indian residential schools.

Several cities across the country have completely canceled Canada Day celebrations, with events also planned in Quebec City and on the South Shore of Montreal where a rolling blockade and disrupting traffic is planned in Kahnawake.

Among those who spoke in Montreal was Denis Saganash, who said his father had a brother who never returned from boarding school in the James Bay region.

“I would really like him to come home,” said Saganash, who spoke through an interpreter.

He called on others to “understand and feel our sadness, our pain for all the children who have not come home”.

Tammy Whitebean, who helped organize the blockade, told CBC Dawn that the event is open to all who wish to join because it “shows us that we have people who care about us, who will recognize the genocide of indigenous peoples”.

It’s a way for others to show solidarity, she said.

Whitebean said given the unmarked grave findings at the residential school sites that have come to light in recent months, people should use this day to mourn and acknowledge what happened.

â€œThat’s a lot of babies who never had the chance to grow up,â€ she said. “They weren’t schools because the schools have playgrounds. They are prison camps because they had graves.”

WATCH | Scenes from the rally in Montreal:

Hundreds of people gathered Thursday in Jeanne-Mance Park in Montreal, not to celebrate Canada Day, but rather to denounce the legacy of Indian residential schools. 1:00

She said people in her community and across the country have not forgotten these tragic events and “will never get over it.”

â€œIt’s not a day of celebration. For us, it’s a day of mourning,â€ Whitebean said.

“Our hearts are certainly not in the Canada Day celebrations”

In a press release, the director of the Native Women’s Refuge of Montreal, Nakuset, who helped organize the march in Montreal, said she was personally feeling the impact of the discovery of the bodies.

â€œMy mother went to residential school in Saskatchewan; these children could be my parents. We organize this gathering as a space to come together, share our pain and sorrow, and draw strength from the wisdom of our elders, â€she said in a statement.

She said that anyone who celebrates Canada on July 1 celebrates oppression.

â€œThe policy of the residential schools was to take children away from their communities so that they could not run away; the multiple layers of cover-up of the crimes are staggering, â€said Nakuset.

In Quebec City, the Assembly of First Nations Quebec-Labrador (AFNQL) organized a march and vigil in memory of the deceased, the survivors and their descendants.

“We invite everyone to come together to stress the importance of paying tribute and offering our full support to our sister nations who are going through extremely difficult times.”

On Thursday, Grand Chief Serge Otsi Simon of the Mohawk Council of Kanesatake made a statement in support of the AFNQL event.

“For too long, the spirits of these children buried in these factories of shame ask us to seek justice for them and those who have survived to live as a testament to the dishonor of this country.”

Simon appealed to people not to celebrate or engage in festive activities on July 1.

“Under the current circumstances, dancing and fireworks would not only be disrespectful and a sign of remorse, but callous to our people and unpleasant to the world.”

The flag that flies over the National Assembly in Quebec is at half mast today, in solidarity with the Indigenous peoples.

At 173.9 cents per liter, gasoline prices hit another all-time high in Vancouver