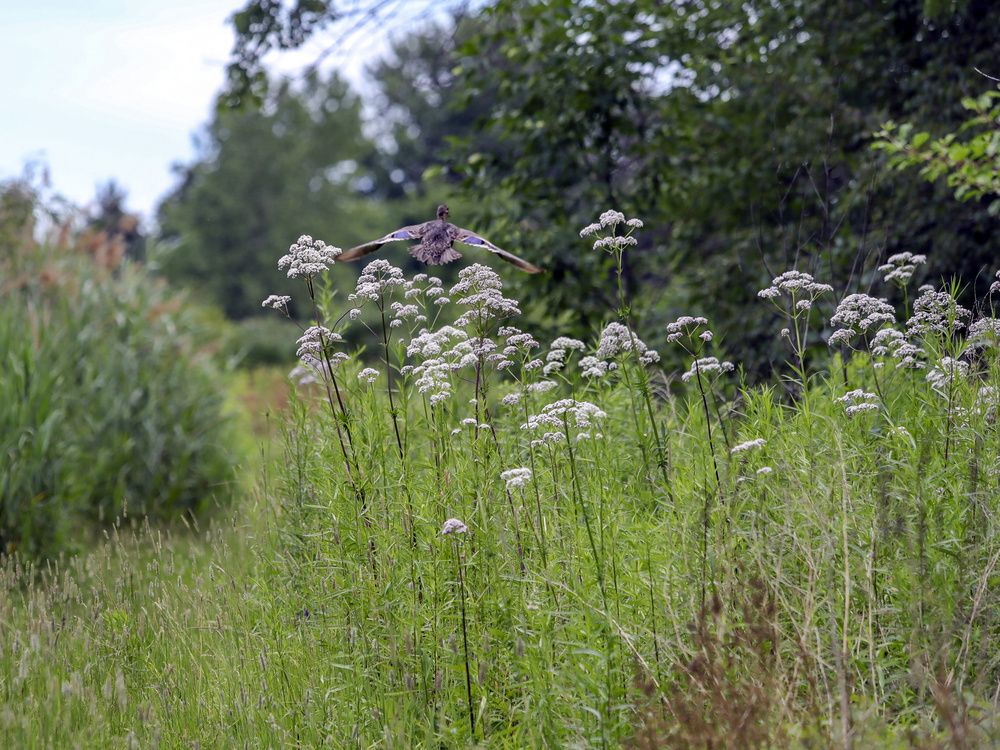 A conservation group in Quebec that has long fought to protect the so-called Monarch Fields northwest of Trudeau Airport says it was shocked to find out last week that they had been razed.

TechnoparcOiseaux estimates that 4,000 milkweed plants — which it describes as essential to the survival of the monarch butterfly — have been mown on the 19 hectares of land that was once part of the Dorval golf course. The group expects the move to affect a host of other species, including birds, that currently nest.

“They only left the trees, they razed all the shrubs,” Benoit Gravel, a member of the citizen group, told the Montreal Gazette on Friday. “For us, it’s incomprehensible.”

Aéroports de Montréal (ADM), which leases and manages land belonging to the federal government, said in an email Thursday that it has carried out normal maintenance operations in the area.

“The ADM maintenance team carried out ground maintenance work in the industrial sector north of the airport site…particularly due to the presence of tall grass and ragweed, which constitute both a nuisance,” ADM spokesman Eric Forest said.

But members of TechnoparcOiseaux say that although there has been minor maintenance around some parts of the grounds over the years, the vast majority has remained untouched.

Since the land was abandoned, it has become a habitat for a variety of species, said Jim Harris, another member of TechnoparcOiseaux.

“It has regenerated itself into a very useful and well-used habitat for many different species of wildlife – birds, mammals, snakes… It’s full of insects, all of which are food for other species,” said he declared.

Groups have been trying for years to gain official conservation status for the larger area that encompasses the Monarch Fields, comprising more than 200 hectares.

“The whole mosaic of the area is made up of wetlands, woods and fields and those are the big three – if you have those big three it will meet most of the needs of most animals,” Harris said.

The Monarch Fields made headlines last fall when a mask production plant was to be built along Aviation Street. At the time, TechnoparcOiseaux and another group, the Green Coalition, had asked the Minister of Environment and Climate Change, Steven Guilbeault, to issue a special designation to prevent the destruction of the fields, which they describe as a priceless ecological environment. Guilbeault refused the request, but the project never came to fruition.

“There has been a very significant outpouring from the public,” Green Coalition Vice President David Fletcher said.

“These areas of land are absolutely a gold mine in terms of protecting the very base of the food web and protecting pollinators, so that’s really harmful, that’s really unconscionable,” he said.

Forest said ADM created areas for monarch butterflies in the Sources Ecological Park section of the Technoparc last fall by planting hundreds of milkweed seedlings and seeds over 200 square meters and that “ADM is committed to protect and enhance this area of ​​high ecological value, for the benefit of the community. »

“I’m not sure any of those have paid off yet,” Harris said. “When they said they wanted to plant more milkweed, we said ‘wow, that sounds good.’ We were never told at the time ‘we plant them because the others are going to be cut down’.”

Harris said while milkweed plants will regrow next year, a generation of monarch butterflies has been lost.

“They had no indication that they were going to do this,” he said. “We certainly didn’t expect that.”

The fear among the groups is that the razing of Monarch Fields means there are building plans.

“We will continue to ask for this area to be protected, as it is currently zoned industrial,” Harris said. “Once it’s gone, it’s gone forever. It will never come back.

Michelle Lalonde of the Montreal Gazette contributed to this report.