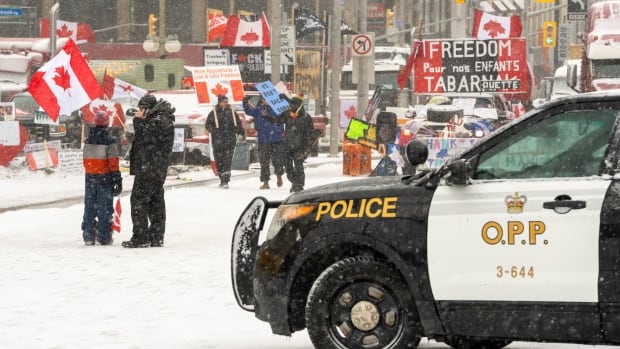 The government’s incident response group and the cabinet have had “daily” discussions about the potential use of the Emergencies Act, Blair said in an interview on Sunday on Rosemary Barton live. He described the attitude around the use of the law, which has never been implemented before, as “appropriate caution” rather than “reluctance”.

Although Blair stressed the importance of ensuring that “the appropriate authorities that are with the provinces are fully utilized”, he said the federal government was “ready to do whatever is necessary”. He did not rule out deploying the army one way or another to help end the occupation.

It’s a change of tone from the stance Prime Minister Justin Trudeau took on Friday, when he said a military deployment is “something to avoid having to do at all costs” while noting that “all options remain on the table” when he talks about blocking. border crossings.

‘We just need the police to do their job,’ says civil protection minister

Emergency Preparedness Minister Bill Blair discusses on Rosemary Barton Live the federal government’s response to protests over COVID-19 restrictions that continue to cause major disruption across the country. 10:44

While much of the responsibility for law enforcement rests with the provinces, Blair told CBC chief political correspondent Rosemary Barton, the federal government has made it clear that “in any situation where the circumstances exceed the capacity or authority of the provinces, we are ready to step in and do what is necessary.”

“There is a role for other federal authorities, and we are looking at the appropriate use of all of these things,” he said, noting the role the Canadian Armed Forces have played in helping in other crises. .

“Enough is enough, it has to stop.”

“We need the police to do their job”

Ottawa police said they had a plan to end the protests, but needed additional resources from out of town. Recently, an integrated command center was set up in the city, bringing together local police with the Ontario Provincial Police and the RCMP.

Similar protests elsewhere in the country have, aside from an ongoing action near Coutts, Alta. have not become as entrenched as the main convoy of truckers that arrived in Ottawa late last month.

A blockade of the Ambassador Bridge in Windsor, Ont., was broken up by police earlier Sunday, with 12 arrests.

Blair said the lack of enforcement in Ottawa was “somewhat inexplicable.” Blair, who previously served as public safety minister, also served as chief of the Toronto Police Service between 2005 and 2015.

“We need the police to do their job, the laws are there.” he said.

On Friday, Ontario Premier Doug Ford declared a state of emergency in the province, with his cabinet signing orders giving police new leeway and increasing penalties against protesters. .

“[Police] now have new authorities and I think very effective tools,” Blair said on Sunday. “We just need the police to do their job and enforce and enforce the law, and to restore public safety to Ottawa.

Politicians at all levels of government condemned the occupation in Ottawa, calling on protesters to leave. Ford called the situation a “siege”. Interim Conservative leader Candice Bergen, who in recent weeks has voiced support for the protest’s goals, said Thursday that “now is the time for you to tear down the barricades, stop the disruptive actions and come together “.