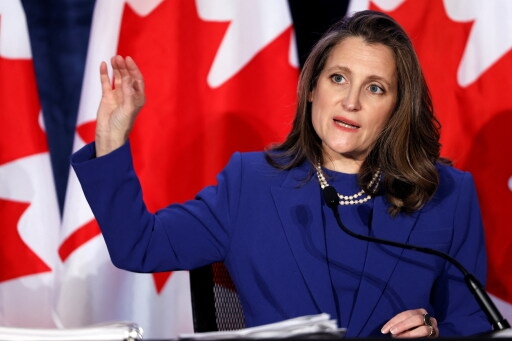 The belief that climate change is an “existential challenge,” as evidenced by its appearance in Finance Minister Chrystia Freeland’s recent budget speech, informs the federal government’s decision to impose tens of billions of dollars in annual costs to Canadians in the form of taxes, expenditures and regulations.

But in fact, the evidence contradicts this narrative of impending death and destruction absent a government reorganization of the economy toward “net zero” emissions. Quoting the SR15 report of the Intergovernmental Panel on Climate Change published in 2018: “Under the reference scenario without policies, the temperature increases by 3.66°C by 2100, resulting in a loss of 2 .6% of global gross domestic product (GDP).

World GDP in the year 2100 is a big number, so losing 2.6% of it is nothing to sneeze at. At the same time, 2.6% of GDP corresponds to one or two years of economic growth. Giving up two years of growth over the next eight decades doesn’t seem like an existential challenge.

Estimates vary, so for those wanting a second opinion, consider William Nordhaus who in 2018 won the Nobel Prize for his work on climate economics. Nordhaus published a journal article the same year in which his baseline scenario showed that climate change would reduce global production by around 3 or 4% by 2100. And as John Cochrane notes in National exam“even extreme assumptions about climate and lack of mitigation or adaptation lead to finding a cost above 5% of GDP by 2100”.

Of course, it might be worth looking beyond 2100 and into the most extreme scenarios, however unlikely. In a recent Cato Institute essay, David K. Levine summarizes much of the expert literature and notes that even if the IPCC’s worst-case scenario – widely considered unrealistic – materializes, “and the planet warms by 6C within a century of 8.6°C by 2200, Nordhaus estimates that this would result in a loss of GDP per capita in 2200 (compared to what would otherwise have resulted) equivalent to the Great Depression.

Nordhaus’ estimate based on the IPCC’s worst-case scenario is that people in 180 years will be 16.5% poorer than they would have been in a world without climate change. But just as a 16.5% reduction in income today would still leave us much better off than people who lived in the 1840s, we should expect that a 16.5% reduction in income for people living in the year 2200 still leaves them with a standard of living that far exceeds what we enjoy today.

“The best science,” Levine sums up, “indicates that if we do nothing to stop climate change, the effect of global warming on our children will be modest and the descendants will be considerably better off than us.” That doesn’t mean we shouldn’t do anything, but the mainstream research nowhere justifies the climate alarmism displayed by Ottawa.

At bottom, Chrystia Freeland’s “existential challenge” is junk science, and expensive government policies to deal with climate change are junk economics. Unable to justify its climate policies or goals with cost-benefit analyses, the federal government unfortunately resorts to deceiving Canadians about climate change.

Matthew Lau is an Adjunct Researcher at the Fraser Institute.

From our newsroom to your noon inbox, the latest headlines, stories, opinions and photos from The Toronto Sun.