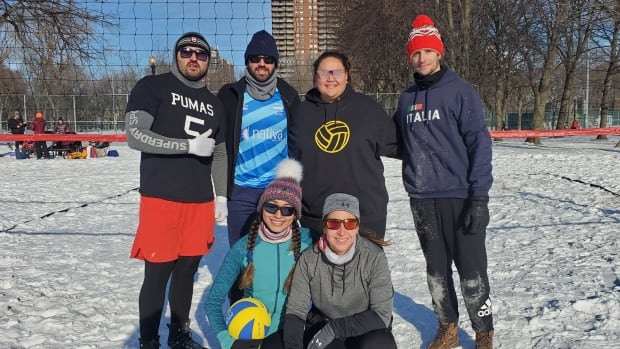 On a freezing Saturday afternoon at La Fontaine Park, a group of Montreal volleyball players proved that no health or weather restrictions would hinder their game this winter.

“It’s tough these days, you know all the COVID restrictions and stuff, we can’t play indoors,” said Anthony Faria, a volleyball newcomer who felt the bite when Quebec suspended all sports and indoor activities in its most recent set of restrictions.

“So you know what we’re saying? We say ‘get out, let’s play outside then’,” he said.

Thus, in a quintessential Montreal gesture, a planned indoor volleyball tournament was moved outside in the Plateau-Mont-Royal borough on Saturday, and various players from different adult recreational leagues served and rushed into the snow.

Among them was AyelÃ©n Orcaizaguirre, who left Argentina for Montreal just four months ago. Despite this being her first encounter with the snow, the longtime volleyball player said the cold won’t dampen her love of the sport.

She said the second thing she did after finding an apartment in Montreal was find a volleyball team and a place to practice.

â€œI try to find the right clothes to go out and play anywhere,â€ she said. “I have played volleyball my whole life and have always loved it.”

In North America, playing volleyball outside in the winter is not so common due to the cold temperatures. But the organizer of Saturday’s snow volleyball tournament said people might need to toughen up as the winter sport is played in many European countries.

“[Everyone] in Europe, it’s playing volleyball on snow right now, â€said NarcissÃ© Nguyen. “Why in North America, in Canada, do we not play this sport? It doesn’t make sense, â€he joked, pointing to the mounds of snow around him.

Nguyen said outdoor sport is a smart option during COVID-19 because the gloves allow players to avoid touching the ball with their skin and they are also able to maintain a distance of two meters during matches.

Nguyen said he wanted to be a pioneer of snow volleyball in North America and help democratize the sport. That’s why it hosts weekly outdoor tournaments for all levels of the Montreal volleyball community every Saturday for the foreseeable future.

“It’s a free sport, it’s for everyone,” he said, adding that he wanted to create a snow volleyball league and had already contacted various field managers who were receptive to it. ‘idea.

A teacher by training in special education counseling, Nguyen said staying active in the winter with something like snow volleyball was “so important.”

He said mental and physical health were his top priorities.

Nguyen hopes that even long after the pandemic restrictions are lifted and people have plenty of choices, they will still opt for snow volleyball, which he says is as specialized as skiing.

Due to the pandemic restrictions creating an increase in the popularity of the sport, Faria – the newcomer to volleyball – believes people will stop worrying about the weather in the future and snow volleyball will become a staple in the city. Montreal.

“I firmly believe this will be the start of something great.”