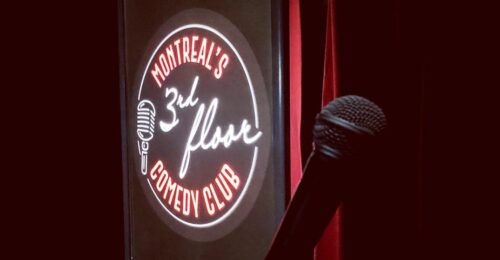 Downtown Montreal has been missing a good stand-up since the popular Comedy Works closed in 2018. But now the aptly named 3rd Floor Comedy Club has opened on the third floor of 2015 Crescent Street (just above the Stogies Cigar Lounge).

So yes, you can now start merging stogies and stand-ups easily.

In conversation with Daily Hive, 3rd Floor Comedy Club manager Josh Shapiro said the venue offers audiences a spectacle they “won’t get anywhere else in the city.”

The goal of the 3rd Floor Comedy Club is to showcase Montreal talent and demonstrate “just how good comedy really is here”. The 50-person venue presents shows every Wednesday, Friday, Saturday and Sunday and will have all-nighters from May.

The all-night variety show begins at 8 p.m. on Saturday and will feature a lineup of local comedians performing throughout the night, giving audiences the option to drop by for shows later in the weekend.

The new venue will also host open-mic nights on Sundays, giving comedic hopefuls the chance to take the stage and crack jokes just by asking for a seat.

Be sure to follow the 3rd Floor Comedy Club for lineup details, dates, prices and times.

What opens on Davie where Starbucks used to be in Vancouver?