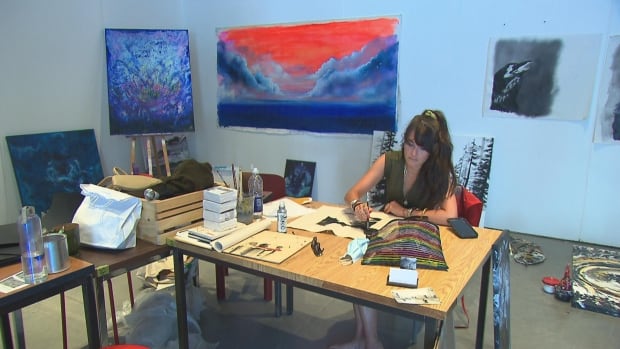 This summer, a handful of empty downtown Montreal storefronts were converted into free studios for artists to create and exhibit their work.

The plan came about with a million dollars in funding from the city of Montreal, which partnered with the annual Art Souterrain urban art festival to organize it.

Frédéric Loury, founder and CEO of the festival, told CBC that the idea has been in the works for several years.

“Building bridges was based on two sad realities. The first is the difficulty for emerging artists to find an art studio and to be able to create links and relationships with new audiences and professionals. Because we know that for the past two years they haven’t had any opportunity to exhibit, ”said Loury.

“And the second objective was for vacant stores,” he added. “We have so many vacant stores in Montreal because [of] the transition from retail to e-commerce. “

Two years ago, Montreal Mayor Valérie Plante began discussing the issue of vacant stores with stakeholders in the business and arts community, so Loury decided to approach the city with her idea.

He said the city had embraced him and that many existing Art Souterrain partners had agreed to offer empty real estate spaces to artists until October.

“They understood it was an opportunity,” said Loury. A map of all the places where artists can be found is available here.

Gonzalo Nunez, a spokesperson for the city, told CBC the investment is part of the economic stimulus package and a way to support artists affected by the pandemic.

“The culture and creativity industry has been hit hard by the COVID-19 crisis. This has exacerbated the precarious situation for emerging artists and from diverse backgrounds, ”Nunez said in an email.

“In addition, with this measure, the City intends to revitalize downtown Montreal and the various commercial arteries struggling with a growing number of vacant premises.

Marie-Chloé Duval is one of the artists who settled in a makeshift studio next to the Le Central food court on Ste-Catherine Street West.

She said being around people in a busy neighborhood was exactly the change of pace she needed.

“Changing places, bringing just a few things and being in a different setup, I was so happy. Especially in summer, having this new vibe and this new perspective on my art is such a gift,” she said. she declared.

“The neighborhood life downtown brings so much. Meeting new people, talking about art and sharing the studio with my good friend and another person I just met, and she makes amazing art. Just those connections, that’s what I mostly hope for. “