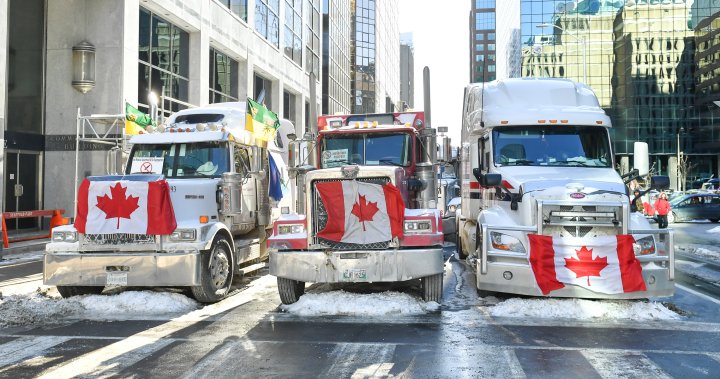 A US-based crowdfunding campaign for protesters who besieged Ottawa neighborhoods is “facilitating” crime, police wrote in a court affidavit used to freeze funds.

The Ottawa Police Service said the approximately US$9 million raised on GiveSendGo was intended to support the protests and therefore “facilitate the criminal act of mischief”.

Signed by a member of the provincial Asset Forfeiture Unit, the affidavit said the money was “essential to support the protest” and was therefore “property intended to be used in the commission of criminal acts”.

The Superior Court of Justice agreed and froze the money raised on the Christian crowdfunding site as crime-related property following a request by the Ontario Attorney General’s office.

The court order prohibits anyone from having any dealings with “donations made through the Freedom Convoy 2022 and Adopt-a-Trucker fundraising campaign pages hosted by GiveSendGo.”

The crowdfunding company responded on its Twitter account, writing, “Know this! Canada has absolutely no jurisdiction over how we manage our funds here at GiveSendGo.

Although funds were frozen, donations continued to pour in on Friday, some from donors who identified as Americans and described Canada as a “tyranny.”

The fundraising campaign began on GoFundMe, but was halted by the platform, which said the protest had turned into an “occupation, with police reports of violence and other illegal activity”.

He then moved on to GiveSendGo, a self-proclaimed Christian crowdfunding site that was used by far-right groups to raise funds ahead of the January 6 attack on the US capitol.

“GiveSendGo does not appear to be an impartial provider of fundraising services for the Freedom Convoy 2022 protest,” Ottawa Police Officer Christopher Rhone alleged in his affidavit.

On the contrary, he was “expressly critical” of GoFundMe’s decision to halt its fundraising and “actively sought out the Freedom Convoy 2022 campaign to join its online fundraising platform,” he wrote.

Rhone’s affidavit alleged that protesters in Ottawa, who want all COVID-19 health measures lifted, were “already switching from traditional currency fundraising to Bitcoin fundraising because Bitcoin is ‘unforfeitable’. »»

There was a “real risk that if GiveSendGo were notified of this request, it would work with the organizers of Freedom Convoy 2022 to ensure funds remain accessible for use in support of the continued occupation or protesting truckers in Ottawa. “, alleged the affidavit.

After the court’s decision was announced on Thursday, the Freedom Convoy 2022 Facebook page posted a link to its bitcoin fundraising page, calling it “another option that many are asking for.”

Ottawa Police Chief Peter Sloly said he would be “relentless” in pursuing sources of funding for the protest.

GiveSendGo co-founder Jacob Wells called it “a lot of hot air and fluff” during an appearance on Fox News.

“GiveSendGo stands for hope and freedom,” the company said on its website. “We recognize that the freedoms we have are given by God, not authorized by governments, but rather freedoms that should be protected by our governments.”