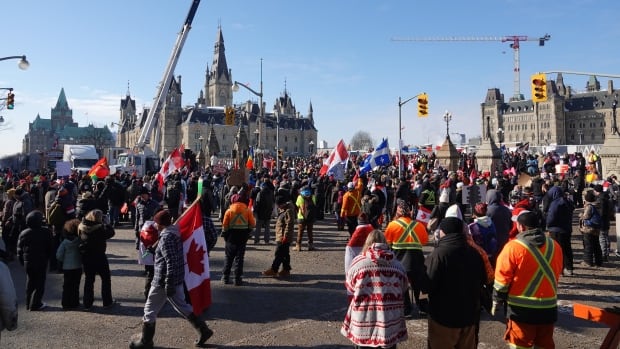 Just over a week since the first vaccination mandate protesters arrived in Ottawa, the ongoing protests are facing financial uncertainty and mounting frustration from local residents – although more protesters are expected to join the group this week-end.

The number of protesters in downtown Ottawa has fluctuated over the past week, from thousands in the city last weekend to about 250 on Tuesday, police said. But Ottawa police say they expect potentially thousands more protesters to arrive this weekend.

Protesters maintained a near-constant level of noise and disruption in the nation’s capital downtown, blocking traffic, honking their horns, setting off fireworks and staging loud music. Local officials and residents have reported instances of harassment and intimidation by protesters.

Organizers are urging protesters to remain peaceful and have sought to maintain a festive and positive mood. Organizers have said they will stay in Ottawa until the federal government lifts all pandemic restrictions – even though most public health restrictions have been introduced by the provinces.

But the protest in Ottawa faces a series of challenges to its continued operation, including a heightened police response, unstable funding and a class action lawsuit.

Ottawa police said they would implement an “escalation and containment strategy” this weekend to restrict access to downtown and reduce the impact of the protests.

“Red Zone protesters remain highly organized, well-funded [and] extremely determined to resist all attempts to end the protest safely,” Ottawa Police Chief Peter Sloly said on Friday, adding that there was no timeline for removing the parked trucks. downtown.

Ontario Premier Doug Ford said on Friday the protest had turned into an “occupation.” This language was also used by Liberal MP for Ottawa Center Yasir Naqvi, who spoke in the House of Commons this week.

Candice Bergen, the interim Conservative leader, on Friday called for a “peaceful resolution to this impasse,” saying Prime Minister Justin Trudeau must provide a plan for resolution.

The protest was fueled in part by money raised through crowdfunding platform GoFundMe, surpassing $10 million on Friday.

Campaign organizers received $1 million of the funds, but the rest was frozen midweek. And on Friday, GoFundMe announced it would stop payments altogether, casting doubt on the protest’s funding.

Organizers said they would use fundraising money to pay for food, fuel and accommodation for protesters and keep them in Ottawa.

GoFundMe will no longer disburse campaign fundraising money for the protest convoy, saying the money will be refunded or donated to charity. Meanwhile, Ottawa police are changing tactics ahead of what is expected to be another weekend of raucous protests. 2:40

GoFundMe will no longer disburse campaign fundraising money for the protest convoy, saying the money will be refunded or donated to charity. Meanwhile, Ottawa police are changing tactics ahead of what is expected to be another weekend of raucous protests. 2:40

“Please if you can donate and help us keep these truckers going, we plan to be here for the long haul,” organizer Tamara Lich said Friday after GoFundMe announced. “As long as it takes to ensure your rights and freedoms are restored.”

The crowdfunding company said the protest violated its rules on violence and harassment.

Protest organizers instead directed supporters to another fundraiser organized by Christian site GiveSendGo, which as of Saturday morning had received more than $800,000 in donations. The site was blocked by PayPal last year after it was used to raise money for people who attended the Jan. 6 riot at the Capitol.

The protest faces another threat in the form of a class action lawsuit filed on behalf of residents of downtown Ottawa. The challenge, led by attorney Paul Champ, argues the protest has caused “significant mental distress, suffering and torment” to residents due to the loud honking “from 12 to 4 p.m.” a day.

The lawsuit, filed in the Ontario Superior Court of Justice, seeks $5 million in “punitive damages” and an additional $4.8 million in damages for “private nuisance.”

Elsewhere in the country, protesters gathered in cities including Toronto, Quebec and other provincial capitals. A large protest is also continuing at the Canada-US border near Coutts, Alberta.

What is a banking desert?