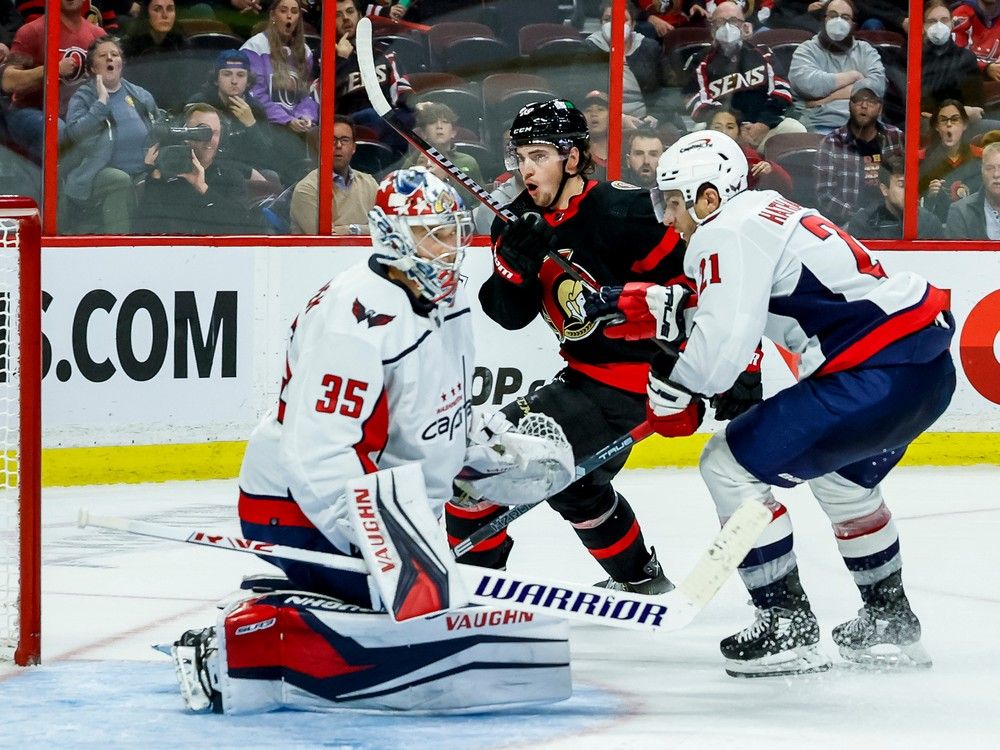 The Ottawa Senators saved the best for last Thursday night.

After scouting the Washington Capitals for an early 2-0 lead, the Senators staged an impressive rally, gradually pulling the game off, coming back all the way for a 5-2 win.

The next issue of HI/O: Montreal‘s Road to the Cup will soon be in your inbox.

Rookie center Shane Pinto broke the 2-2 deadlock in the third period, finishing off a pass from Tyler Motte and beating Capitals goaltender Darcy Kuemper. Pinto has now scored in three consecutive games, establishing a presence with his quick late-game exit.

Just seconds after Pinto’s goal, Senators goaltender Anton Forsberg made a spectacular glove save against Marcus Johansson, throwing himself through the crease for the save.

“I was just trying to get something out there and I guess I was a little lucky he hit my glove,” Forsberg said. “Obviously it was one of those saves you wanted to make as a kid, so it was good.”

Motte and Alex DeBrincat then iced the game, both scoring their first goals as Senators in an empty net at the last minute.

Senators coach DJ Smith credited his team’s resilience for allowing them to recover from a slow start.

“It’s a different team here,” he said. “There is more maturity and they are able to be calmer and they are able to step up a gear. Obviously we weren’t in the kit we wanted to be in (in the first half), but give that dressing room credit. These guys, what they did was they prepared for second and third.

The Senators have now won the first two games of their extended five-game home stretch, tying their early-season record at 2-2.

They’re back on Saturday afternoon against the Arizona Coyotes.

Tuesday’s crowd of 14,210 at the Canadian Tire Center offered polite applause for the opening ceremony, which included a video tribute to the late former Senators owner Eugene Melnyk. His daughters, Anna and Olivia, threw the ceremonial first puck and a Melnyk banner was unveiled in the rafters and now hangs next to those honoring Frank Finnigan, Daniel Alfredsson and Chris Phillips.

Unlike Tuesday’s home opener, when they scored a goal, it took the Senators a while to get their legs back.

The story of the first two periods was all about power plays. The Capitals took the man advantage twice in the first period, with TJ Oshie and Anthony Mantha recording the damage.

Drake Batherson responded with a pair of second-period power-play goals, sending the game to a 2-2 stalemate in the third period.

After a lukewarm start to the competition, the temperature warmed as the game progressed – Jake Sanderson needed stitches after being shot in the head – and the parade to the penalty box got worse. is continued.

At one man, the Senators said the fourth line of Mark Kastelic, Austin Watson and Parker Kelly made the difference, responding physically after the hit on Sanderson.

“Those two shifts there, I was like ‘oh my god, what a hit, oh my god, what another hit,'” Batherson said. “There were about six in a row there, so that was awesome. we like that. those three guys bring a ton of energy and kept the boys going.

The Senators entered the competition with a little weight on their shoulders after Tuesday’s 7-5 win over the Boston Bruins, their first victory of the young season.

As a result, there was a much more relaxed feeling around the locker room before the game.

Also, Evgeny Kuznetsov was out of the lineup, serving a one-game suspension for Kyle Burroughs of the Vancouver Canucks.

Still, the Capitals were on a two-game winning streak as they took to the ice at the Canadian Tire Centre.

Of course, there’s always the Alex Ovechkin watch, as he tries to chase Wayne Gretzky for the NHL’s all-time scoring record.

At the tender age of 37 and sporting plenty of gray hair, Ovechkin still has the magic touch, entering the competition with two goals and three assists in his first four games this season.

After a slow start, a questionable Sanderson call and a late game penalty against Travis Hamonic set the stage for the Capitals, who enjoyed a 72-second 5-on-3 advantage.

Oshie scored with the two-man advantage and Mantha followed 34 seconds later with the Capitals still on the power play.

In the second period, it was time for the Senators power play to shine.

Batherson got the Senators on the board in a 4-on-3 situation, finishing off a deft passing game involving Alex DeBrincat and Brady Tkachuk.

Just 1:51 later, Batherson scored again on the power play, heading for the net to grab his own rebound and bury it past Capitals goaltender Darcy Kuemper, setting the stage for the final touch of the third period.