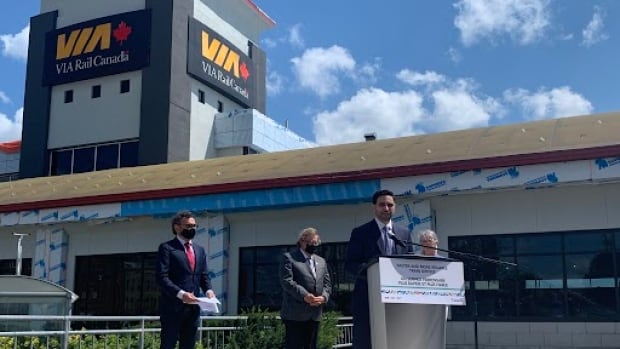 The southwestern Ontario rail corridor that connects London and Windsor to Toronto will be the subject of further study as Ottawa commits to “exploring opportunities” to improve service.

Federal Transport Minister Omar Alghabra was in London, Ontario on Wednesday at the VIA Rail station to announce the federal government’s commitment to improve intercity passenger rail service. He failed to make a financial commitment or detail a plan.

“I know how frustrating it is for the people of London, who have heard about the studies and the work needed, but let me just say that we are talking about a significant investment of taxpayers’ money for this infrastructure … it looks like a speech but it’s not, it’s action, “said Alghabra.

There is no completion date for this project, but Budget 2021 pledged $ 491.2 million over six years to VIA Rail Canada for infrastructure investments.

“There is a strong demand for improved passenger rail services in southwestern Ontario.

He concluded that it was a good investment and that the province committed $ 11 billion to build it. This project was dismantled the following year when the Conservative government was elected.

“We have planted a clear commitment. Today we make it clear to the people of this city that London should see drastically improved rail service. Now the details need to be worked out, of course, but London could have been ignored. We have taken a turn here for the better, ”said Peter Fragiskatos, Member of Parliament for London North Center.

London Mayor Ed Holder has said he expects different levels of government to keep their promises.

“I don’t think it becomes a never-ending story, I think the minister who is here today is making a statement. No taxpayer would expect a government to be able to make the kind of billions of dollars. dollars that will be needed unless they understand what they’re doing, ”Holder said.

“I don’t think a reasonable taxpayer would say, ‘Build it and hell with the cost.’ We need to know what the costs and the implications are. “

Part of the problem is that VIA trains run on CN tracks, which pushes back passenger service when freight arrives, Holder said, calling today’s announcement a “legitimate first step.”

23 affordable housing units for Indigenous women in difficulty in Montreal

It’s time to open the border for vaccinated Canadians