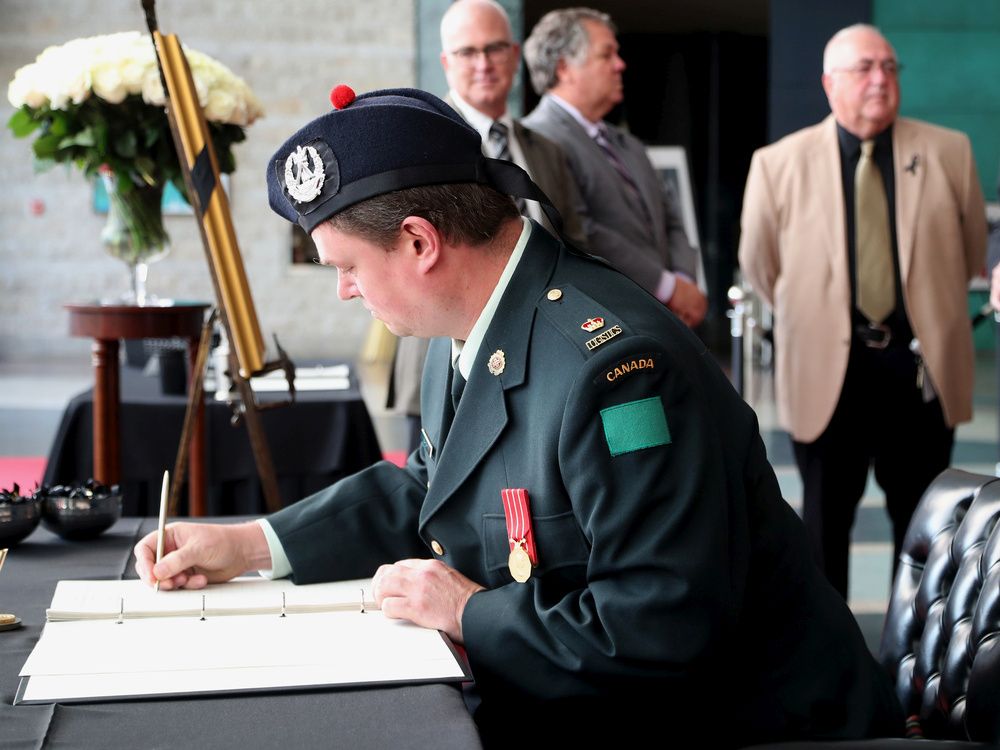 At City Hall in the nation’s capital, which she called her ‘second home’, Canadians touched by the life and death of Queen Elizabeth II stopped to write messages of condolence about the woman whom they remembered as a rock, a role model and a ruler who will be hard to replace.

“She was just a tall, graceful, inimitable lady,” Kimberly Beek, 54, said tearfully as she described the bond she and her husband, who both served in the Air Force, felt with the queen who had reigned since before them. were born.

“I also think as a woman. She was such a positive role model in so many ways. And I know that sounds very strange – especially to, you know, young women, who are definitely a different type of feminist. But I mean, the queen was cool,” Beek said.

“For example, she took the Saudi king in a car when he didn’t allow women in his kingdom to drive… She had a way of understanding the context of the year and where she was and to put her best foot forward, but also to think of constantly, I think, how she represented her country and her people.

Britons Hannah Francis and William Cazzaniga were traveling by train from Montreal to Ottawa on a 50th birthday trip when they learned of the Queen’s death on Thursday. The end of an era is how Cazzaniga described it.

“It just seems like when everything else in the country was blowing up or imploding, she always found something to say that reassured the whole country,” Cazzaniga said.

“Someone who got up and went to work every day for 70 years, you know, she took an oath and kept it…That’s hard to find these days.”

With the Queen’s death also comes a realization, he said, that “you are getting older and something, another part of your life, is changing”.

The cousins ​​both left the UK in 2008 but still reside in the Commonwealth. Francis lives with his family on Vancouver Island and Cazzaniga now lives in Perth, Australia.

Considering what comes next for the monarchy, “It will be interesting to see what Charles does. It’s going to take some getting used to,” Francis said, adding that social media – where “the good, the bad and the downright ugly” are already playing out – could be influential.

Born in the reign of King George VI and aged two at the time of Elizabeth’s coronation, Vanier resident Betty Gagnon said the monarch was “a great queen” whose death touched her.

“She was for the people, you know? And we had her for a long time, so I was so used to her.

As for the new King Charles III, “Ahh, yuck. I’m not too demanding with him,” Gagnon said. “What he did to Diana, Princess Diana, I don’t like it… But we’re stuck with him so we have no choice because he’s next.”

Ottawa Mayor Jim Watson was the first to sign a condolence book at City Hall, where residents can write messages until sunset on the day of the Queen’s funeral or memorial service . They can also submit messages of condolence online through the city’s website.

Watson said on Friday he supported the monarchy.

“It’s part of our history. And, while I respect some people who are against the monarchy, I think they play an important role, as does, for example, the Governor General… as the Queen’s representative, when the Queen is not not in Canada, and I think it’s important to respect and continue those traditions,” he said. “Nowadays, there are very few traditions that last very long. And I think the monarchy has been a stable, stable part of our constitutional system since 1867.”

When members of the royal family come to Canada, Watson added, it’s a boon to the economy of any city they visit. In the case of Ottawa, there have been about a dozen visits from Queen Elizabeth II.

Thinking back to her attendance at a Mayor’s Breakfast on Canada Day when Jackie Holzman was Mayor, what stood out to Watson was the Queen’s contact with the elderly. “Listening to them, wanting to know a little bit more about them, and that was so exciting,” he said. “People came to me afterwards and said it was the best time of their lives because they were so close to the Queen…inside the Aberdeen Pavilion on July 1.”

Ralph Swinwood and Linda LeBlanc-Swinwood were children when they first saw the Queen outside the Parliament Buildings on her first tour of Canada as the new sovereign. They didn’t know each other then, but it was something they would repeat for future visits from Queen Elizabeth II, then Prince Charles, and royal couple William and Kate.

“She played a very important role in our… childhood,” LeBlanc-Swinwood said. “She was like a part of our family.”