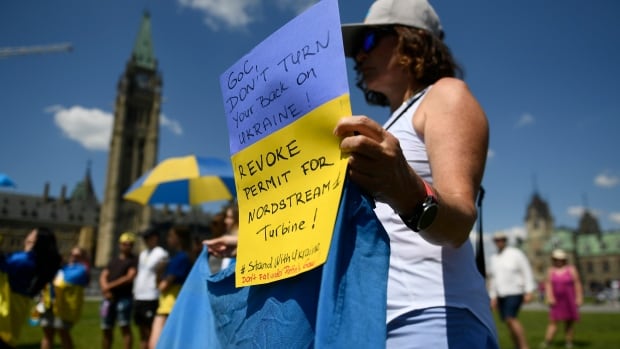 Protesters on Parliament Hill called on Canada to ‘be brave like Ukraine’ on Sunday and maintain economic sanctions against Russia, just hours after Ukrainian President Volodymyr Zelenskyy delivered essentially the same message to the Prime Minister Justin Trudeau.

In a phone call between the leaders, Zelenskyy told Trudeau that his position on Russia sanctions “must be principled” at a time when relations between Canada and the beleaguered country are somewhat strained by Canada’s controversial decision to send parts of a Russian gas pipeline. back to Germany.

Zelenskyy recapped their conversation in a short statement shared on Twitter, saying he thanked Trudeau for the continued strong defense support Canada has offered his country, but also stressed the importance of maintaining sanctions.

“After the terrorist attacks in Vinnytsia, Mykolaiv, Chasiv Yar, etc., the pressure must be increased, not decreased,” he said.

Trudeau reiterated Canada’s support for Ukraine against Russia’s military aggression, according to an official account of the Prime Minister’s Office discussion.

The two leaders also spoke of maintaining unity among their allies and imposing “significant costs” on Russia, the Prime Minister’s Office said.

Canada agreed earlier this month to grant an exemption from economic sanctions imposed on Russia in response to the invasion of Ukraine. The two-year waiver would allow six Siemens Energy turbines, which were in Montreal for repairs, to be returned to Germany for use in Russia’s Nord Stream One gas pipeline.

Trudeau previously defended the decision and said Canada’s German ally was dependent on natural gas supplies from the pipeline.

In a written and video address last week, however, Zelenskyy called the move “absolutely unacceptable.”

“It’s not their children who are dying”

The decision left several Ukrainian supporters who attended a rally in Ottawa on Sunday afternoon in a state of disbelief.

Canadian-Ukrainian Yuri Kolomiyets told the crowd of around 150 supporters gathered on the lawn of Parliament Hill that the decision will mean more oil and gas money for Russia to fund its attack on Ukraine. .

“I guess it’s fine to provide genocide maniacs with technology and money, as long as it keeps German voters happy,” Kolomiyets told the crowd, drawing cries of “shame” in response.

“It’s not their children who die in the missile strikes.”

Two young protesters, Arsenii Pivtorak and Ladislao Zaichka, have camped outside Parliament Hill for days and say they have been on a hunger strike since July 9, when the waiver was announced.

“This decision broke our hearts. We felt that Germans’ pockets were more important than Ukrainians’ lives,” said Pivtorak, 19.
said of the decision.

Zaichka said he was particularly passionate about the decision because he had family in Ukraine.

“What Justin Trudeau has done and what the Canadian government has done is heartbreaking for me as a Canadian, but even worse for me as a Ukrainian,” he said.

The Ottawa branch of the Ukrainian Canadian Congress planned the rally on Parliament Hill to urge the government to revoke the waiver.

Canada and Germany, in our view, were manipulated here by the Russians.​​​​– Ihor Michalchyshyn, National Executive Director of the Ukrainian Congress

Protesters called on Deputy Prime Minister Chrystia Freeland, who defended the turbine decision last week, to respond to the Ukrainian community in Canada. They also chanted for the government to “stand with Ukraine”.

Speaking to reporters on a teleconference after a meeting of G20 finance ministers in Bali, Indonesia on Saturday, Freeland said Germany’s ability to maintain support for Ukraine could be at risk if the turbines were not returned. She said a united G7 effort would be needed to support Ukraine and that allowing repaired parts to return to Germany was “the right thing to do”.

The congress’ parent organization, the Ukrainian World Congress, has asked the Federal Court for a judicial review in hopes of stopping the turbines from going to Germany.

“We believe that Canada and Germany have been manipulated here by the Russians,” National Executive Director of the Ukrainian Congress Ihor Michalchyshyn said ahead of the planned protest.

The group argues that Canada bowed to Russian blackmail and set a dangerous precedent that will lead to the weakening of the sanctions regime imposed on Russia.

Prime Minister Justin Trudeau says the decision to return the turbines does not affect Canada’s support for Ukraine.

“It’s a decision that angered Canadians and the Ukrainian government,” Michalchyshyn said.

He said Ukrainian-Canadians involved in his group initially expressed surprise and disappointment when they learned that Canada would allow the turbines to return.

The Ukrainian Canadian Congress is expected to appear at a meeting of the Foreign Affairs Committee to discuss the decision, along with the ambassadors of Ukraine, Germany and the European Union to Canada.

Foreign Affairs Minister Melanie Joly and Natural Resources Minister Jonathan Wilkinson were also called to the committee to answer questions about the exception.

Sail the North Shore for charity returns at North Van.