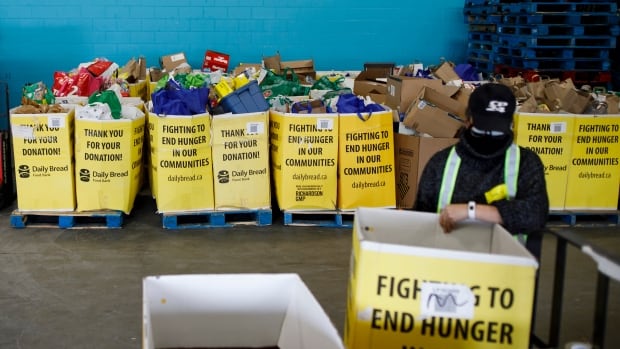 Governments must step in to help the tens of thousands of people who have been forced to use Toronto-area food banks for the first time due to soaring housing prices, rising inflation and income stagnation, warn experts and food policy advocates.

The Daily Bread Food Bank says it recorded 171,631 visits to Toronto in June alone – a record number which it says is only set to continue to rise, with nearly 8,000 new customers last month.

“We’ve never served so many people in a single month, and it’s part of a trend we’re seeing increase month over month,” said Diane Dyson, acting vice president of research. and advocacy of the organization.

The average monthly number of users before the pandemic was around 60,000, estimates Daily Bread. Experts say many people new to food banks are caught in a cycle of rising prices, with Canada’s inflation rate hitting its fastest pace in nearly 40 years, reaching 7.7% in May, according to Statistics Canada. Food prices are also an important factor, having increased by 9.7% over the past year. Meanwhile, people’s salaries aren’t keeping up.

“While we also saw a record number of donations, we are buying more food than ever before,” Dyson told CBC Toronto.

Before COVID-19, Dyson said the charity would buy around $1.5 million worth of food in a year. Today, it spends about $13 million a year.

Many who use food banks for the first time have one or more jobs, she added.

Dyson said that at the start of the pandemic, Daily Bread received money from the federal government. But with no funding currently available for food banks, it relies solely on donations from individuals and private organizations.

She said it was important to consider long-term solutions.

“Food banks will never be able to meet all the hunger and food insecurity needs in our city,” Dyson said.

“We need to make sure that living wages are living wages, that housing is affordable, that social assistance supports a good life.”

Mustafa Koc, professor of sociology at Metropolitan University of Toronto and director of the Center for Food Security Studies, agrees.

“My fear is that if we get hit by what we call stagflation – both an economic slowdown as inflation continues,” Koc said.

“Then we’ll have much worse problems. And that’s why we need political solutions as the food banks themselves suggest. No more food banks.”

“Federal and provincial collaboration will likely lead to effective policy solutions. But this is not just a Canadian problem. It’s a global problem and we may need to think about global solutions as well,” he said. declared.

Valerie Tarasuk, a professor of nutritional sciences at the University of Toronto, says that while more people are turning to food banks as prices rise and incomes remain generally stagnant, lower-income groups are hardest hit.

“While food banks are the public face of food insecurity or hunger…these numbers represent a very small fraction of people struggling to put food on the table due to a lack of money,” said Tarasuk.

“The inflationary pressures we are seeing in Canada right now can only make things worse for these people.”

Tarasuk said income support programs such as Ontario Works do not provide adequate support to cover basic living costs. She added that working-age adults and families who are part of the labor force also do not have incomes that keep pace with the rising cost of living.

“These reports of food price inflation should ring alarm bells for people at the federal and provincial levels,” she said.

“The solution to this problem is to examine the sources of income of the most vulnerable people and ensure that they are at least indexed to inflation, which is not currently the case in Ontario,” said added Tarasuk.

“[And] also looking for policy levers like the Canada Child Benefit, to say ‘how can we put more money in the pockets of very low income families?'”