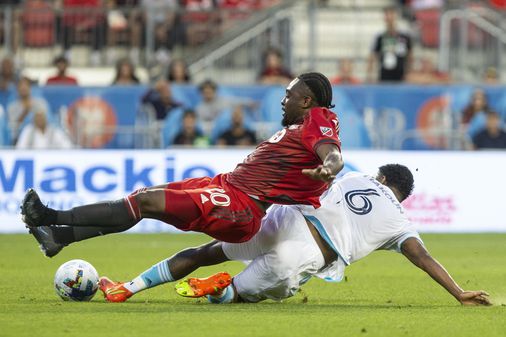 The Revolution switched rosters and went with low-cost youngsters in key roles as they took on Toronto FC to a 2-2 draw on Wednesday night.

Tommy McNamara and Justin Rennicks scored in the first half, and a 5-4-1 line-up helped stifle TFC’s top Italian national teams at BMO Field in Toronto, the Revolution (8-7-10, 34 points) extending their unbeaten streak to five games.

Missing several starters, the Revolution added 17-year-old Esmir Bajraktarevic and Noel Buck in the second half to counter Federico Bernardeschi and Lorenzo Insigne. Bernardeschi gave TFC the lead (8-12-6, 30 points) with a first-half penalty, but the Revolution rallied, despite losing midfielder Wilfrid Kaptoum to an apparent leg injury left.

Bernardeschi’s 31st-minute left-footed penalty into the right side of the net snapped the Revolution’s shutout streak to 402 consecutive minutes. Ayo Akinola got the penalty kick, falling in a clash with Christian Makoun on a through ball from Jayden Nelson.

McNamara equalized with a second chance from a cross from Gil in the 37th minute, his second goal of the season.

The streak began with a build-up by Revolution from the back, following a warning from Akinola for a foul on Carles Gil. A cross from Gil to Brandon Bye put pressure on the TFC back line, Bye then returned another cross to Gil. As Rennicks made a run close to the post, Gil’s low centering pass was canceled out by Alex Bono nullified the cross, McNamara following, his first try missed, the second jumped into an open net.

Rennicks broke the deadlock, sending Gil to Bono’s feet for his second goal of the season. The streak began with a take-away Matt Polster, Gil slowing play, Rennicks passing Lukas MacNaughton in the right side of the penalty area.

After falling behind, Toronto sent outside backs Domenico Criscito and Richie Laryea into the attack, and pushed centre-backs Chris Mavinga and MacNaughton high, with Bernardeschi assuming a free role. Laryea went down, claiming a penalty, referee Fotis Bazakos waved play, then confirmed the no-call via VAR, but did not caution Laryea for simulation.

The Revolution nearly capitalized when Bajraktarevich broke away but failed to find Gil, allowing TFC to recover and earn a controversial corner. Just after Bazakos awarded a corner, with the Revolution hoping for a free kick, Criscito equalized with a volley from a pass from Michael Bradley in the 75th minute.

The Revolution played without central defender Henry Kessler (health and wellness protocols), who will also miss the team’s visit to Montreal on Saturday.