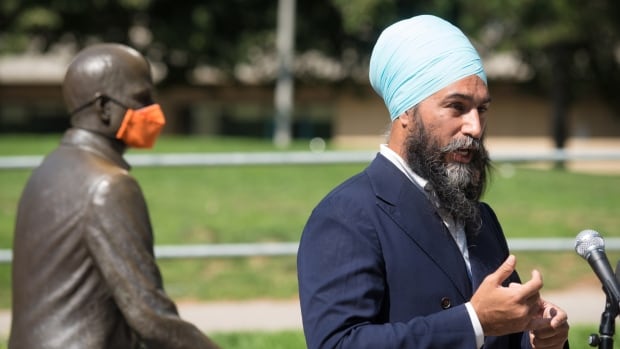 NDP Leader Jagmeet Singh has said his party will seek to rename a Toronto riding to honor the legacy of Jack Layton, the former NDP leader who died of cancer on Sunday 10 years ago.

Singh made the announcement Sunday at Nathan Phillips Square in Toronto, where he was joined by Mike Layton, Toronto city councilor and son of the late NDP leader.

Before speaking to reporters, Singh scribbled a chalk message on a wall filled with tributes to Layton on the anniversary of his death. “We will carry the torch for you,” Singh wrote.

Jagmeet Singh spoke to reporters during a stop at Toronto City Hall on Sunday. 1:21

Layton represented the eastern riding of Canada’s largest city from 2004 until his death in 2011.

Although the NDP won a by-election to take the seat in 2012, it has been Liberal-held since 2015.

Singh said that as the leader of the movement that Layton is an integral part of, he often receives messages from Canadians who say Layton inspired them to believe that the best was possible.

Singh said Layton had helped him overcome political cynicism when he first considered entering public life. Singh was an unelected federal candidate in the 2011 federal election which saw the New Democrats achieve official opposition status, in large part thanks to the “orange wave” in Quebec.

“I didn’t really believe politicians could make a difference. And my friends pointed at Jack and said, ‘Well, what about Jack?'” Singh said.

The NDP leader denied that the proposal is intended to try to influence voters in Toronto – Danforth to vote for his party.

The constituency was won by liberal Julie Dabrusin in 2015, who is running again. The NDP candidate in the riding is Clare Hacksel, Executive Director of the Choice in Health Clinic. The 25 seats in Toronto are currently held by the Liberals.

Singh said the idea is to tap into a tradition of honoring those who have made great contributions to Canada.

“Here in Toronto, people know the legacy of Jack Layton, how he touched the lives of so many people, how he fought so hard to improve the lives of people,” he said.

“And it seems very appropriate to push for the name change of a constituency he has represented in honor of all he has done.”

“Jack and Jagmeet have a lot in common,” says Mike Layton

Mike Layton called the idea a “touching gesture” and said he didn’t think it politicized the anniversary of his father’s death.

He also expressed optimism that Singh will take the NDP to heights they haven’t seen in a decade, as Canadians know him more and more.

“I think Jack and Jagmeet have a lot in common, and one of those things is that they lead with their hearts,” Layton said.

The NDP comes up with ideas that will help the most vulnerable, who don’t feel like they are represented in government right now, he said.

“It was very similar to what Jack was proposing, saying that we need to have responsible policies that work for people, that help people, but we also need policies that will pay for it,” said Mike Layton, touting the NDP’s call for a wealth tax.

Dabrusin had little to say about the NDP proposal, telling CBC News in an emailed statement that it focused on the people of Toronto – Danforth.

“I will continue to work hard every day to address issues that matter to our community, such as tackling climate change, access to affordable child care and reconciliation,” she said.