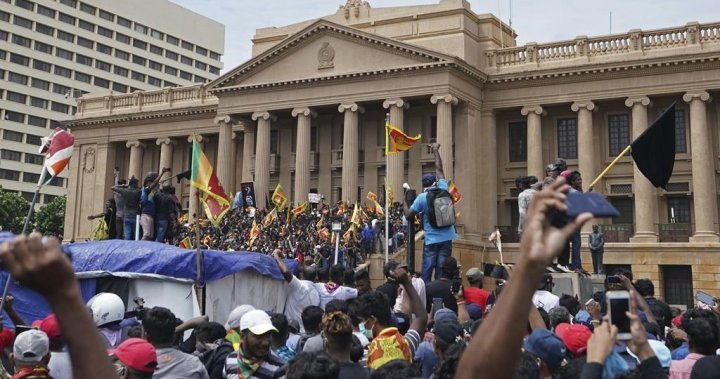 Some Sri Lankans living in Canada are welcoming the promised resignations of that country’s embattled leaders, after protesters angered by the economic collapse stormed the homes of the president and prime minister over the weekend.

Sri Lankan President Gotabaya Rajapaksa and Prime Minister Ranil Wickremesinghe on Saturday gave in to protesters’ demands to step down over corruption and mismanagement that have led to deepening crisis in the country. Rajapaksa promised to step down on Wednesday, while Wickremesinghe said he would leave once a new government is in place.

Sena Munasinghe, president of the Sri Lanka Canada Association of Brampton, said the leadership resignations were “long overdue”, but added that it was unfortunate that it took violence and the destruction of property to that they withdraw.

“Destroying property and damaging things won’t help anyone, it will make (the situation) worse than it is now,” he said. “There is no control and the police cannot maintain law and order in the country, so it is a very bad situation.”

Sri Lanka, in ‘total chaos’, will have a new president amid economic collapse

Munasinghe, who immigrated to Canada from Sri Lanka in 2004, initially supported Rajapaksa and supported the president for years, but said that amid the country’s economic collapse and worsening political unrest, it was time for someone else to take over.

After three months of protests, the resignations have not ended the crisis that has left the island nation in debt and its 22 million people suffering from severe shortages of food, fuel and medicine.

Protesters have vowed to occupy official buildings until key leaders leave office. For days, Sri Lankans have flocked to the presidential palace as if it were a tourist attraction – swimming in the pool, marveling at the paintings and lounging on the beds piled high with pillows.

Archana Ravichandradeva, executive director of People for Equality and Relief in Lanka, said she had mixed reactions to seeing images of protesters occupying the residences of civil servants and hopes the transfer of power will bring change for all Sri Lankans. .

“Tamils ​​have been protesting for a very long time and have constantly been met with the barrel of a gun,” she said.

2:07
Sri Lanka unrest as PM and president both vow to step down

Ravichandradeva, whose family fled Sri Lanka in 1998 when she was four and now lives in Markham, Ont., said Tamils ​​have been sounding the alarm against Rajapaksa and leaders like him for decades.

Appealing to the nationalist sentiment of the island’s Buddhist-Sinhalese majority, Rajapaksa led Sri Lanka to a triumphant victory over Tamil rebels in 2009, ending a brutal 26-year civil war that divided the country. Rajapaksa’s fate is currently unknown.

Ravichandradeva said the economic problems facing the rest of the country – such as restricted fuel and citizens limited to one meal a day – have been experienced by Tamils ​​in Sri Lanka’s northeastern region during and since the war. .

“The rest of the country is now catching up with what Tamils ​​have always known about the country and these leaders,” she said.

Katpana Nagendra, secretary and spokesperson for the Tamil Rights Group based in Markham, Ontario, said the organization welcomes the regime change but wonders if it will bring about meaningful change.

“If the Tamil people had protested in the same way groups are now protesting in Sri Lanka against the government, we probably wouldn’t have had the freedom to storm into the presidential palace. We would definitely have been shot,” Nagendra said.

“It’s disheartening to see that we didn’t have the same civil liberties, but all the power for groups protesting against the government.”

Why is Sri Lanka in economic crisis? Here’s what we know

People for Equality and Relief in Lanka and the Tamil Rights Group have said they want to see Rajapaksa, along with other Sri Lankan leaders with ties to his family, tried for allegations of genocide and war crimes against the Tamil people.

The Canadian Tamil Congress issued a statement on Tuesday calling for a peaceful and democratic transition of power for all citizens. The organization alleged that the Rajapaksa regime had brought to Sri Lanka rampant corruption, nepotism, lack of regard for minority rights, racist laws and poor tax policies.

He said Tamils ​​in Sri Lanka and the Diaspora will soon remember the 39th anniversary of “Black July 83, when thousands of Tamils ​​were killed and billions of Tamil properties were looted or destroyed”.

He said more than a million Tamils ​​have since left the country for safer homes, including Canada.

Sri Lankan lawmakers agreed late Monday to elect a new president from their ranks on July 20, but have yet to decide who will take over as prime minister and who will fill the cabinet.

Earnin Review: What You Need To Know