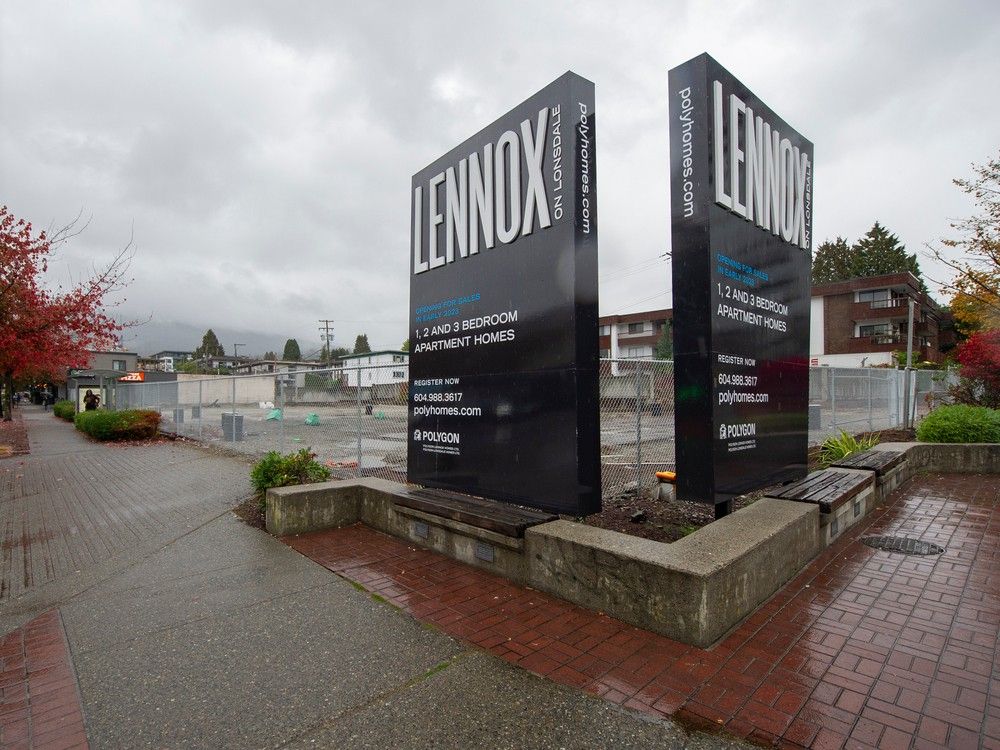 Sales of condos and townhouses that won’t be delivered for several years have slowed significantly to levels not seen in a decade.

Industry watchers say rising interest rates and economic uncertainty are causing buyers to pull out and developers to delay projects.

Start your day with a roundup of BC-focused news and views delivered straight to your inbox at 7 a.m., Monday through Friday.

The next issue of Sunrise presented by Vancouver Sun will soon be in your inbox.

“I think a lot of people in the industry are wondering what’s going to happen next. Are we here for a moment? Or will we see things come back next year? asked Amar Pal, a Vancouver real estate agent.

In the third quarter of 2022, there were 1,522 pre-sale condo and townhouse transactions, down 72% from the all-time high of 5,481 for the same period last year, according to Zonda figures. Urban, which follows the pre-sale marketplace for developers.

This comes as buyers in other markets are also on the sidelines due to rising interest rates and economic uncertainty. Altus Analytics looked specifically at sales of new condos sold in the Toronto area for September and found an 89% year-over-year decline.

On Wednesday, the Bank of Canada is expected to raise its key rate by at least another 50 basis points as it struggles to rein in inflation, which will likely put even more pressure on pre-sale condo projects.

North Vancouver real estate agents expected two projects to begin pre-sale contracts this fall, but both launches have been pushed back to next spring or later, examples of what is happening elsewhere in Metro Vancouver.

These include Lennox at Lonsdale, a project by Polygon Homes for 64 condos, and Emerald by Ebb and Flow, a development by Woodbridge Homes and Citimark for 41 townhouses. Agents say they expected sales centers or registrations to start around September, but were delayed.

Developers are generally vague about why they want to launch later, preferring to keep the tone positive.

“They are never explicit. It’s a game of optimism,” said a veteran pre-sale contract agent, who declined to be named for fear of jeopardizing his longstanding relationship with developers.

A Surrey-based estate agent said many projects had been launched over the summer and had not gone well, but she would not mention the names of the projects. She said most offer huge incentives, but they still don’t sell out quickly, so it makes sense to pause project launches.

Some developers, particularly those who may have bought land when it was cheaper, can make price adjustments and make sales more easily than those with less wiggle room on their balance sheets, explained Pal.

“What I’m seeing is that developers aren’t going to hit the market now if they can afford to wait. So some of the bigger projects that we thought might come this fall, they’ve been pushed back, and they just said, ‘We’re not going out now. We know the market isn’t there for the numbers we need to hit to make sense in our budgeting. So they’re going to wait and reevaluate at spring.

Zonda Urban’s Bennest is sure third-quarter sales would have been weaker in 2008 and 2009 following the financial crisis, but he doesn’t have numbers beyond 2010 to hand.

He thinks the next quarter should be a bit higher since some of the launches that didn’t happen between July and September were moved to October and “worked reasonably well.”

More news, less ads: Our in-depth journalism is possible thanks to the support of our subscribers. For just $3.50 a week, you can get unlimited, lightweight access to the Vancouver Sun, The Province, National Post and 13 other Canadian news sites. Support us by subscribing today: The Vancouver Sun | Province.