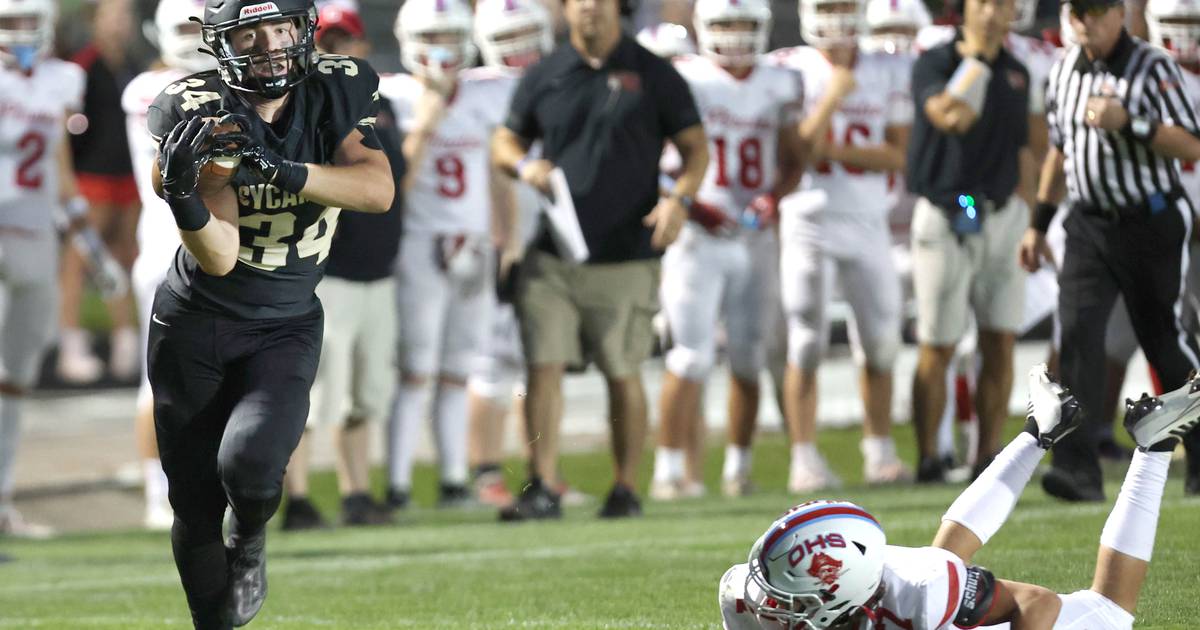 SYCOMORE – In a clash of teams undefeated through the first three weeks of the season, it took Sycamore just over three minutes and five offensive plays to take a two-point lead over Ottawa at Engh Community Field on Friday night.

A 36-yard touchdown pass from Elijah Meier to Joey Puelo 128 seconds into the game got the Spartans going. Then, on Ottawa’s second play after the scrum, Kiefer Tarnoki caught a pass from Pirates QB Colby Mortenson near midfield and sent it back to 1, where Tyler Curtis followed with a scoring dive to give the hosts a 13-0 lead on their way to a dominating 54-20 victory on the clock.

Sycamore is now 4-0 overall and 2-0 in the Kishwaukee River/Interstate 8 Conference White Division; while Ottawa fell to 3-1 and 0-1.

It was the eighth meeting between the programs since 2012, with Sycamore now the winner of all but the inaugural clash.

“That’s what you want to do when you’re playing at home and your opponent is also 3-0 up. In those types of games you want to tackle them early because the longer you let teams stay in the game, they start to feel pretty good about themselves,” Sycamore head coach Joe Ryan said.

“I think we executed really well, especially with the early game plan. We have a lot of team speed and we tried to use that to our advantage early in the game.

Sycamore added two more scores in the first quarter, first with Meier — who was 9 of 9 passing for 181 yards and four touchdowns — finding Burke Gautcher, who broke three tackles on the way to the end zone. Then, after the Spartans defense forced their second punt, Curtis kicked it from the 4 to make it 26-0.

Meier and Puleo reconnected early in the second on a 35-yard TD pass to make it 33-0.

Ottawa burst into the scoring column five minutes before halftime on Levi Sheehan’s 46-yard fumble return score, but the hosts used a 10-yard touchdown run from Zack Crawford (five carries, 107 yards) and another Meier-to-Gautcher (four catches, 96 yards) throw and catch, starting on the 12 this time, to hold a 47-7 lead at the break to secure a second half on the clock.

“Sycamore are performing at an extremely high level, and they did that here tonight,” said Ottawa head coach Chad Gross. “The half-time and post-game message to our kids was that this is the next step we need to take as a program. We were happy to start the season 3-0, but to get to the level that we finds Sycamore, we must also perform at this high level.

“We had some positives tonight, as the defense took the ball a few times, and we scored a touchdown directly on it, but there’s a lot of learning and error-correcting we can take from this. evening for the next week.”

In the second half, Ottawa scored twice, on a 74-yard play between Mortenson and Conner Price and a 15-yard touchdown by Keevon Peterson. Sycamore added a 3-yard dash by Zachary Daring.

“We’ve been good in all three phases of the game so far this season, and that’s something you have to do if you want to have a strong regular season and a deep run in the playoffs,” Ryan said. “We had a few turnovers tonight which are unacceptable, and we missed a few more points, but other than that I felt like it was a pretty solid effort from the kids.”

Next week, Ottawa will host Kaneland for their homecoming, while Sycamore will be in Rochelle.