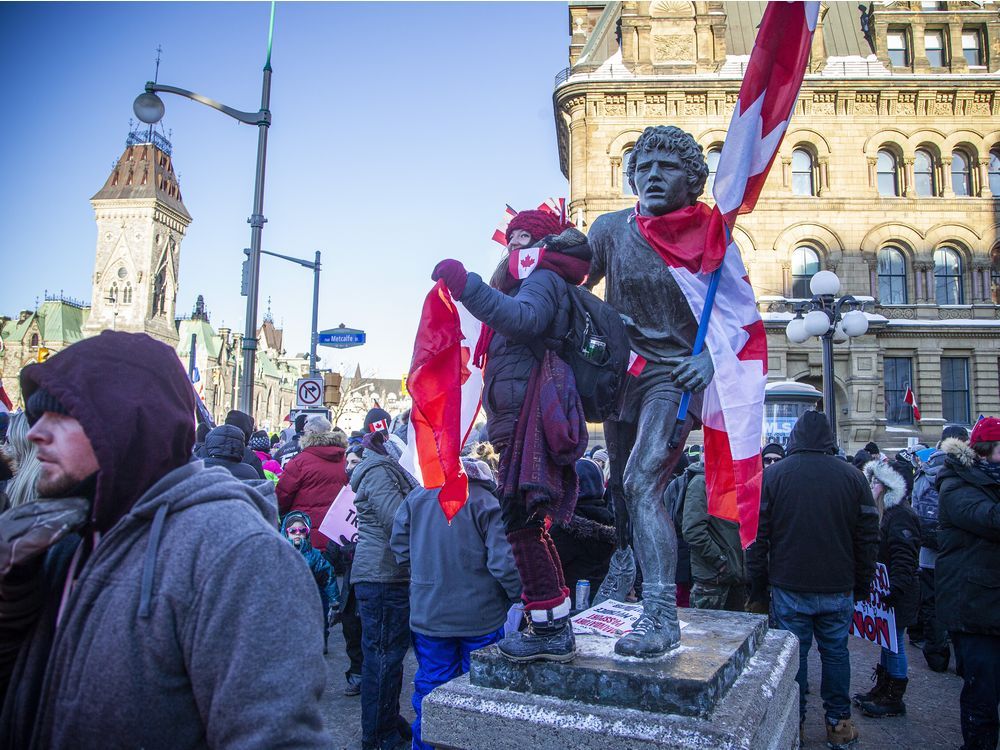 The mayor of Port Coquitlam is upset that vaccine mandate protesters have defaced a statue of the city’s local hero, Terry Fox, in Ottawa.

Along with many others, West expressed dismay after photos were posted on social media showing the statue holding an upside-down Canadian flag and a sign reading “freedom of the warrant.”

The incident happened Saturday during a protest against vaccination mandates by a convoy of trucks that arrived in Ottawa on Saturday.

“Whatever your cause, you are not appropriating his legacy and you are not touching his statue. Never. This should be removed immediately,” West said in a tweet.

I’m the mayor of Terry Fox’s hometown. He is our city’s hero, a national inspiration and a unifier. Whatever your cause, you are not appropriating his legacy and you are not touching his statue. Never. This should be removed immediately. @ottawacity @JimWatsonOttawa https://t.co/Souo0BodaJ

Ottawa Mayor Jim Watson said in a tweet that he asked staff to remove the upside-down sign and flag, calling it “completely unacceptable” and the kind of stunt that “doesn’t help not their cause”.

The photo was widely shared on social media on Saturday, sparking widespread outrage. Many noted that Fox was an advocate for science and that vaccines provide protection against COVID-19 for vulnerable cancer patients.

Terry Fox was immunocompromised. The juxtaposition of this fact with his desecrated statue is heartbreaking.

On Saturday, The Terry Fox Foundation tweeted that “Terry believed in science and gave his life to help others” and thanked his supporters for helping make Fox’s dream of a cancer-free world come true.

Kelly Curwin, spokeswoman for the Terry Fox Research Institute, said they would not comment further on the incident.

Meanwhile, some protesters gathered in Vancouver and a Chilliwack trucker had organized a rally in support to travel to Vancouver from Langley and back to Chilliwack, according to a report in The Chilliwack Progress.

There were also small groups of protesters at the south end of the Burrard Bridge cheering on some trucks. Some protesters carried People’s Party of Canada signs, while others held defaced Canadian flags cursing Trudeau. A number of cars and standing protesters had flags waving upside down.

According to the Canadian government’s flag rules, the country’s flag should never be flown upside down, except as a distress signal in times of extreme danger to life.

Vancouver Police Const. Tania Visintin said cops were aware of the truck convoy in Vancouver and as of 1 p.m. there were no issues or arrests.

The Canadian Trucking Alliance released a statement on Saturday, saying that as the protests unfold over the weekend, “we ask the Canadian public to be aware that many of the people you see and hear in the media have no connection to the trucking industry”.

A convoy of trucks took to the streets of Ottawa on Saturday to protest the vaccination mandates. Ottawa police had to help Rideau Center management and security shut down the downtown mall “due to overcrowding” of unmasked protesters.

People’s Party of Canada leader Maxime Bernier attended the rally in Ottawa and addressed supporters on Parliament Hill where he lambasted the Conservative leader for not showing up. Conservative Leader Erin O’Toole said Friday he supports their right to be heard and called on Prime Minister Justin Trudeau to hear their concerns. Trudeau was in isolation on Saturday after one of his children was infected with COVID-19.

This is completely unacceptable and I have asked the municipal bylaw to remove the sign and the upside down Canadian flag. This kind of stunt by protesters does not help their cause

The Terry Fox Foundation is proud to continue Terry’s mission to fund cancer research. Terry believed in science and gave his life to help others. Thank you to all of our supporters who help us make Terry’s dream of a world without cancer come true. 🇨🇦 pic.twitter.com/5MSky1YfVM