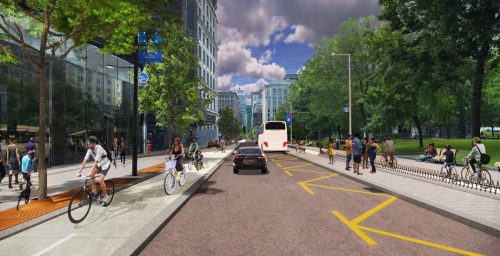 Peel Street in downtown Montreal is getting a $108 million makeover.

On Tuesday, the City of Montreal announced that the popular downtown street, between René-Lévesque and Sherbrooke, will be “transformed for the 21st century”, in a press release in French.

The project will include the reconstruction of underground infrastructure, the widening of sidewalks, the creation of a new protected cycle path, the planting of dozens of trees and the installation of new outdoor furniture along the street.

The new bike path will be part of the city’s 184-kilometre route and will extend Peel Street to other cycling arteries.

Once the renovation is complete, Peel will have one-way northbound traffic, allowing for more cyclists and larger patios for merchants. The plan also includes spaces for deliveries, short-term parking and a drop-off point for tourist buses.

Peel Street will finally be worthy of the 21st century: a street that meets the needs of all users and promotes active mobility. The development of this street will contribute to making our city center the most beautiful and the greenest! Check them out: https://t.co/WeAPxnVQjQ #polmtl pic.twitter.com/G1wK5rDLpo

Montreal Mayor Valérie Plante says the new Peel project is part of the city’s vision of making downtown “the most beautiful and greenest in North America.” According to her, the $108 million investment in the “economic heart” of Montreal will create a “unique atmosphere, to the delight of workers, residents and tourists. We consulted the population and merchants, we learned about their needs and I am proud of the result we arrived at.

6 remote jobs in Toronto that will pay you over $100,000 for working from home

MoneyMutual Review: The Leading Payday Loan Company to Use?