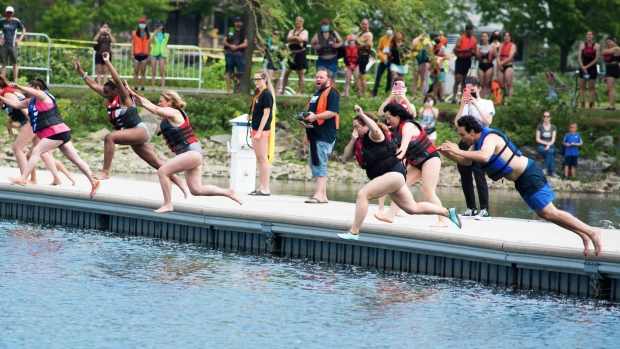 MONTREAL – About thirty people braved the freezing temperatures on Saturday morning by jumping into the water of the St. Lawrence River to demand “public and safe access” to swimming in the Jacques-Cartier basin of the Old Port of Montreal .

The event, dubbed the Great Splash, was organized for the 15th year by the Fondation RiviÃ¨res.

The environmental organization says that the water in the Jacques-Cartier basin is “almost always clean and safe to enter”.

The group wonders why the SociÃ©tÃ© du Vieux-Port de MontrÃ©al refuses to swim there.

“How many years will it take for the authorities of the Old Port of Montreal to imitate their counterparts in Quebec?” the foundation wrote in a press release announcing the event.

The foundation refers to the decision of the Port of Quebec in recent days to create a public beach in the Louise Basin next summer.

According to the most recent data published on the interactive map of the bacteriological quality of watercourses published on the City of Montreal‘s website, the water quality is considered “good” at the Old Port marina, and even â€œexcellentâ€ not far away at the Plage de l’Horloge.

The SociÃ©tÃ© du Vieux-Port de MontrÃ©al told The Canadian Press that it refused to admit that the water in the Jacques-Cartier Basin is suitable for swimming. The organization referred questions about water quality to the Port of Montreal.

“Would the Crown corporation agree to build a swimming pool at this location? The area is ‘dedicated to navigation’,” said Director of Marketing and Business Relations Nathalie CarriÃ¨re. â€œConcessionaires are there, including Bateau-Mouche and Le Petit Navire, the river shuttles to the East and Longueuil use it and there is also the port of call.

The SociÃ©tÃ© du Vieux-Port de MontrÃ©al says it is open to the development of a port beach on its land and says it is working with the City of Montreal on the alternative to the Clock Tower quay, an option that has often been rejected in because of the security issues which include the current strength and the risks associated with shipping.

– this report by La Presse Canadienne was first published in French on July 3, 2021.

Here are the five cheapest homes for sale in Vancouver right now.