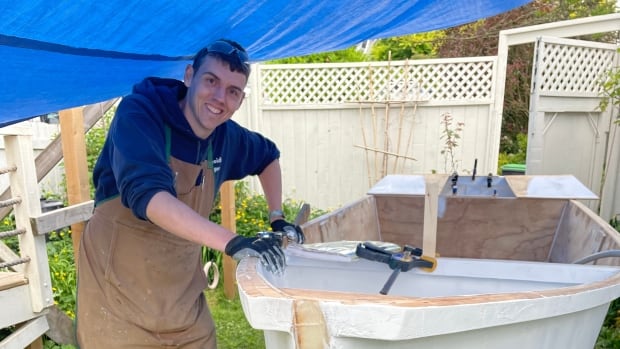 It was supposed to be a memorable Father’s Day weekend for the McDonald family.

Duncan McDonald, along with his wife Julie and two young daughters, spent over a year building a sailboat from the ground up. Christened by his daughters as ‘Salor DoThat’, the boat’s maiden voyage was scheduled for Father’s Day weekend off the Sunshine Coast.

But their plans were shattered when the boat was stolen.

In a Facebook postthe family claims the boat was stolen from its boat trailer near Fraser Street and East 25th Avenue, near their home in East Vancouver.

“We took it out last night,” McDonald said. “I asked a few neighbors to help me lift the boat and put it on the (boat) trailer that was waiting for it. And this morning I was taking out the trash before I left and it was gone.”

The boat is a 14-foot flat-bottomed skiff with a white base from bow to stern and a blue sail on her mast. Duncan says it’s made of plywood from Home Depot, as well as scoured wood from the neighborhood. The license plate on the boat trailer is WHW 89A.

Julie McDonald says they received rallying support from the community after posting on Facebook.

“It’s been a lot of tears,” she said. “But the amount of social media [attention] was comforting.

“They think the boat probably isn’t expensive, but they understand that emotional connection, the memories and the importance of Father’s Day.”

“It was really nice to see how affected people are by this stuff,” he said. “It would be nice to see the conclusion of the story is to put it in the water and see how it goes.”

The couple said they filed a complaint with the police.

Duncan McDonald, a teacher with a background in carpentry, began building the sailboat in the spring of 2021.

“I wanted to do something silly and challenging and interesting,” he said. “Something I had no business to build. I mean, who builds a sailboat?”

The decision came on a whim, he says, adding that he took sailing lessons to justify building the ship and bought a book from the 1970s to learn how to build it.

Eventually, his wife and two young daughters helped out, he says: his six-year-old daughter learned to use power tools, while his toddler drew on the boat.

McDonald also remembers his daughters playing with Salor DoThat. “The cousins ​​come and jump on the boat. They pretend the grass is water.”

Julie McDonald says her husband had worked hard to achieve the goal of setting sail on Father’s Day.

The project has also caught the attention of the neighborhood, she says.

“I’m pregnant now and there came a time when I couldn’t work with the boat anymore,” she said. “Every time Duncan had to move it or turn it over, he had to call a few neighbors to come and help him.”

She says the community support since the boat went missing has given them reason to stay positive.

“The journey or the story feels very incomplete,” Duncan said.

“I hope someone sees it and says, ‘Hey, it’s a sailboat’ and we can get it back.”

An atmospheric river will flood Vancouver with rain on Thursday