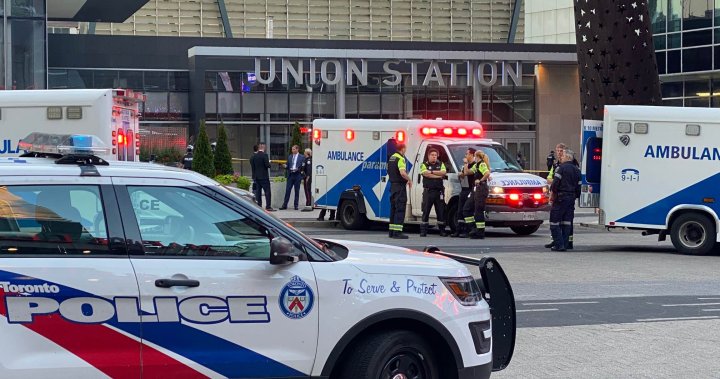 Toronto’s Union Station locked down after nearby shooting

Toronto’s Union Station was locked down Saturday night after a shooting nearby.

A man was shot and confirmed to have sustained life-threatening injuries, police said.

Toronto doctors attended to the man.

The shooting took place at the intersection of York Street and Bremner Boulevard.

“Police reported tonight that a gunshot victim was outside Union Station and they have ordered the station evacuated,” said Anne Marie Aikins, media and public relations manager for Metrolinx, to Global News, noting that she and her family were among those evacuated.

“Trains are not entering or leaving the union station currently and are otherwise on hold until police determine everyone is safe. Our staff are safe and in a secure location. We promise to keep customers informed as information comes in. Safety is our first priority.

Union Station has been evacuated and no trains are currently running. The area is in the hands of the police. Please be prepared for updates https://t.co/nXGwryiiJZ

Suri Diaz, 29, was eating at Union Chicken inside the station when security arrived and told restaurant patrons to slowly start making their way to the exit.

“A few minutes later, the station was completely evacuated and the police were on the scene,” she told Global News.

Union Station has 300,000 daily visitors, according to its website.