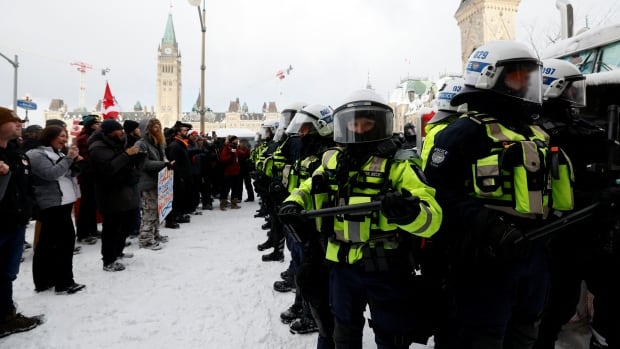 The prime minister’s national security and intelligence adviser said Thursday the government was right to invoke the Emergencies Act to end the anti-vaccine protest that swept through downtown Ottawa last month because protesters were “entrenched” and “there is no doubt [they] came to overthrow the government.

“That their ability to do it was there, that their understanding of how to do it was realistic, actually had no relation to what they wanted to do,” Jody Thomas said. “I think we have to think about it from that goal.”

Speaking at the Ottawa Security and Defense Conference on Thursday, Thomas said the emergency law was meant for extreme situations and the so-called “freedom convoy” had hit that bar.

She said the protesters’ blockade of the Ambassador Bridge in Windsor was resolved just as the emergency law kicked in, but the occupation of downtown Ottawa “in itself was sufficient” for the ‘invoke.

“The Ottawa occupation was entrenched, they had supply chains, they had an organization, they had funds coming from all over Canada, but also from other countries,” she said.

Thomas told the public it is an “oversimplification” to describe the convoy occupation as a “protest”.

“We lived in the splendid and naive superiority that it was not our problem in Canada. That it was a problem south of the border, that it existed in other countries, but not in Canada, and that’s just not true. it worries me.”

Thomas said the government had “a lot to unpack” in order to understand the problem and fix it.

She said 26 Canadians have been killed and 40 injured since 2016 by ideologically motivated violence.

An organizer demanded the resignation of heads of government

National security expert Wesley Wark said anyone observing the movement might conclude there were anti-government elements within its ranks who might or might not have a practical plan to overthrow the government.

Many of those supporting the convoy signed a “Memorandum of Understanding” (MOU) issued by Canada Unity, one of the organizers of the convoy. The document calls on governments at all levels to end “unconstitutional, discriminatory and segregationist actions and human rights abuses” caused by vaccine requirements and passport systems.

The memorandum of understanding also demanded that heads of government “immediately resign from their lawful positions of authority” so that the protesters could somehow form a new government with the Governor General and the Senate of Canada. .

Wark said it is important to note that in triggering the Emergencies Act, the government said it was taking this action to address a risk of serious violence to persons and property in Canada . He said the government could have included the threat to overthrow the government in that statement, but did not.

He added that while a global movement has embraced the anti-government rhetoric, it’s hard to determine how successful it is in Canada.

He said it is “exaggerated” to suggest that there is a strong undercurrent in Canada of people embracing ideologically motivated violent extremism.

“I think it can become a self-fulfilling prophecy if we turn the entire government security apparatus and attention to this issue, which I frankly think is overshadowed by many other national security issues that we have. here,” Wark said.

Conservative public safety critic Raquel Dancho called the government’s use of the Emergencies Act a “massive overreach” of federal power that was not justified by the lockdowns.

“Today’s admission by the Prime Minister’s own national security adviser proves that the incredibly high threshold needed to justify invoking the Emergencies Act was never met when they stated that the Freedom Convoy had neither the ‘capacity’ nor the ‘understanding’ of how to become a credible threat to our public safety or our democracy,” Dancho said in a statement to CBC News.

The government must hold an investigation into the use of the Emergencies Act within 360 days of its revocation.