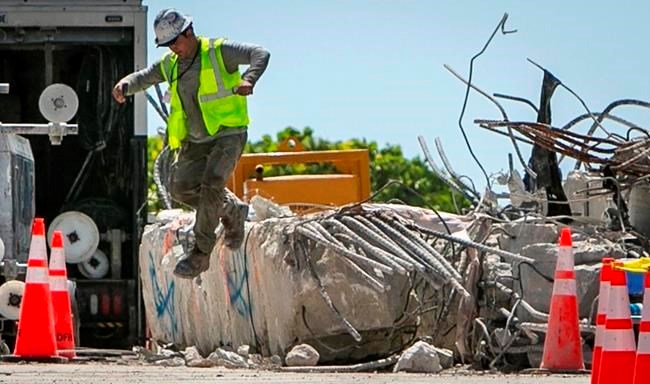 MONTREAL – Two young Montrealers vacationing together have been identified as among the dead and missing following a condominium collapse near Miami last month.

MONTREAL – Two young Montrealers vacationing together have been identified as among the dead and missing following a condominium collapse near Miami last month.

Accenture, a multinational consulting firm with an office in Montreal, said in a statement today that it mourns the loss of its employee Michelle Pazos, as well as her father.

Pazos, 23, was visiting her father’s apartment in Surfside, Florida with her friend Anastasia Gromova, who is still missing after the tragedy.

Miami-Dade police confirmed they removed Pazos’ body from the rubble of the collapsed building on July 9, while that of Miguel Pazos, 55, was found the day before.

Gromova’s mother, Larysa Gromova, confirmed in a written message that her daughter is one of four Canadian women missing after the collapse.

Local authorities say at least 97 people died from the June 24 collapse and, as of Monday, 95 of those victims had been identified.

A LinkedIn profile associated with the name Michelle Pazos suggests that she studied Marketing Management at McGill University before working in the Accenture Montreal office.

“We deeply mourn the loss of Michelle and her father and our hearts go out to all those affected by this tragedy,” the company said in an email.

Gromova’s mother, who flew to Florida from Canada after the collapse, called the wait for responses “terrible” and “painful.”

“It’s too much, it’s taking too long,” she told The Associated Press on Monday.

Gromova said her daughter visited Pazos in Florida before leaving to teach English to students in Japan.

“She went on vacation for two weeks. She was a young girl. She had her whole life ahead of her,” the grieving mother said. “Something so sudden, so many buildings in Miami. It had to be hers during the week she was here.”

Global Affairs Canada has confirmed that the remains of three Canadians were found at the site of the building collapse and that one person is still missing. He did not name the deceased, but said he was providing consular assistance to families.

She and her Australian husband, Tzvi, had lived in Canada briefly before moving to Australia and eventually Florida. The couple had seven children and were celebrating the birth of two grandchildren, their niece Chana Harrel said.

This report by The Canadian Press was first published on July 20, 2021

– With files from The Associated Press