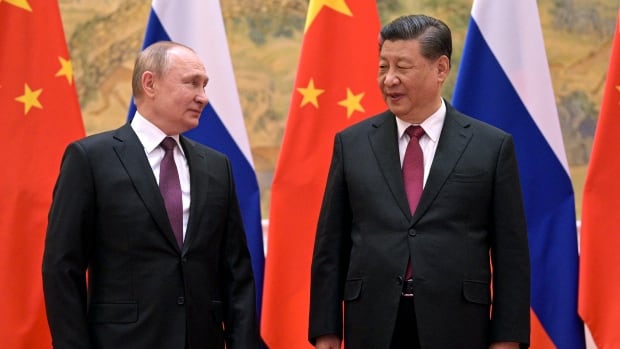 US President Joe Biden declined to comment on Thursday whether he was urging China to join the international community in condemning Russia’s invasion of Ukraine.

The two countries – after all – have recently become fast friends.

Last month, they announced a “limitless” partnership, essentially a non-aggression pact denouncing outside interference in their respective territorial areas of interest.

They also signed a 30-year gas pipeline deal – a deal that saw China extract huge concessions from Russia in return for money that President Vladimir Putin will have to deal with Ukraine-related sanctions.

Yves Tiberghien, a political science professor at the University of British Columbia, said China’s approach to Russia was tactical. There is no love lost between the two nations – and he says internal polls show mutual distrust between their citizens.

He wonders if the mercenary nature of the relationship could mean that there is at least some room for the West to exert influence over China.

“They’re going to have this background mentality where they think why would we hurt the only tactical alliance we have when we’re not going to win anything,” he said.

“So I’m wondering from a very rational point of view if there’s a space there for China to realize that ‘You’re still a part of this global economy, in the global system, and despite all the problems we have with you – Russia just went bankrupt, everything, broke all the rules, so you don’t want to be with them.'”

China has refused to condemn Russia’s attack on Ukraine, instead accusing the United States and its allies of inflaming a tense situation.

Experts agree that the Asian superpower is playing a central role in the crisis, both as an ally of Russia and as the world’s largest exporter of consumer goods – deeply dependent on globalization to fuel its economy.

Canada Research Chair in Global Politics and International Law, Michael Byers says he saw firsthand evidence of China’s importance to Russia during a visit to Western Siberia in 2015.

He says he has noticed a sharp increase in the number of freight cars crossing the border to China on the Trans-Siberian Railway – indicating Russia’s restructuring of its economy to deal with the impact of sanctions imposed in 2014 in response to the annexation of Crimea.

“It was non-stop freight trains, just the volume of natural resources that were being shipped to China,” Byers said.

At the same time, says Byers, anyone looking across Vancouver‘s English Bay to the line of freighters waiting to unload Chinese goods in North America can see that China’s future is also tied to Western interests. .

“In the short term, China still needs access to Western markets,” Byers said. “China is economically much more integrated with the West than is Russia.”

He says China has staked its reputation and position in the United Nations Security Council on the principle of UN territorial integrity, which prohibits states from using force to impose their will on the independence of another state.

“And China maintains to this day that it supports Ukraine’s sovereignty and territorial integrity,” Paltiel said.

“They are tying themselves not to criticize Russia at the same time as they realize the gravity of the situation.”

WATCH | What could really be behind Putin’s attack on Ukraine:

Why did Putin attack Ukraine now?

“The longer it waits, the stronger China becomes”

Observers are drawing a clear parallel between Russia’s invasion of Ukraine and a possible future Chinese invasion of Taiwan.

But Tiberghien, Byers and Paltiel all agree that China is unlikely to see Putin’s actions as a green light to act on Taiwan – which China claims as its territory.

Byers says there are differences between the two situations — the most important of which is that the United States has a defense commitment to Taiwan.

He says China is more likely to play the “long game”, watching to see if the fight against Ukraine weakens the West.

“China is getting stronger the longer it waits, and it is looking at the United States, which is a country in turmoil.”

Tiberghien says he’s been monitoring social media outside of China to get a sense of the reaction to Ukraine’s invasion. He says some voices – most likely backed by officials – are warning Taiwan not to rely on the United States

“But many mainstream voices and middle-class Chinese people are shocked by the reality of the war in Ukraine and write that war is a crime,” Tiberghien said.

“They believe that China is rising, but rising in a world of economic interdependence. China’s economic strength is completely linked to globalization.”

WATCH | How propaganda played a role in Putin’s invasion of Ukraine:

State media’s elaborate vilification of Ukraine and a lengthy personal essay on the story are just part of the propaganda campaign that Russian President Vladimir Putin has used to lay the groundwork for the invasion of his next to. 8:08

“Egg on Her Face”

China has invested heavily in the Belt and Road initiative, a grand plan to connect Europe, Asia and Africa by investing billions in construction projects in more than 60 countries.

Paltiel says the invasion of Ukraine threatens the physical structure of the plan, asking “what kind of connectivity is going to cross Eurasia right now?”

But he also says China’s post-colonial partners like Kenya, which has strongly condemned Putin’s actions, will watch how China welcomes Russia’s attempts to restore the kind of old world order that has devastated Europe. Africa.

Paltiel says there’s only one man who knows what China’s response to Putin’s actions will be and that’s Chinese President Xi Jinping – who, like his Russian counterpart, has come under fire. leading spirit of his country.

“At the end of the day, if they convict him, then Xi Jinping is left with an egg on his face, because he went out of his way to praise Putin just a few days ago,” Paltiel said.

“And on the other hand, if they don’t completely condemn this, then their friends in the post-colonial world will question China’s position on sovereignty. It’s really difficult.”

This immersive Peter Pan-themed bar is coming to Vancouver

What is a payday loan?