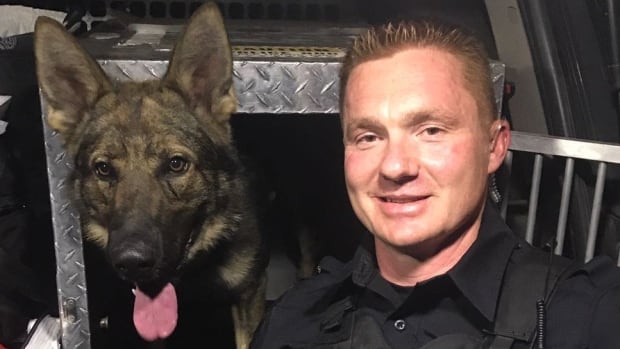 A Vancouver Police Department dog handler has been acquitted of all charges related to an arrest that left a shoplifter with a bite wound that took 19 stitches to close.

const. Jonathan Kempton was found not guilty in British Columbia provincial court on Monday of four counts, including two counts of assault with a weapon, one count of attempted obstruction of justice and one count of dangerous driving.

Judge Jay Solomon wrote that Kempton’s use of force during the May 9, 2019 arrest appeared reasonable and appropriate, that his conduct was “not particularly dangerous” and that Crown had failed to prove that the officer made false statements or misleading in its reports of the incident.

Kempton’s encounter with suspect Christopher Swain began when he and a “number of officers” were called to the Home Depot on Terminal Avenue to respond to the theft of a set of $200 drill bits, according to Solomon’s judgment. Kempton brought his dog Jocko and another officer had a police dog named Rocco.

Swain and another suspect fled the scene on bicycles, the judge said, but the second man was arrested without incident. Swain refused to stop for the officers, who released Rocco to pursue him.

According to the judge, Rocco was winning over Swain, so Swain threw a bag with the bit placed inside at the dog and kicked him.

Meanwhile, Kempton was chasing Swain in his SUV and trying to cut off his escape routes. As Swain made a sharp right turn into a parking lot on Evans Avenue, Kempton also spun around and his SUV hit Swain, knocking him off his bike, according to the ruling.

The accident had “minimal impact”

The judge said the evidence suggests the collision was not an assault but rather an accident during a lawful arrest.

“It also appears to have been low speed and minimal impact,” Solomon wrote.

After the crash, Kempton stopped his vehicle and, without warning, released Jocko with orders to bite the suspect.

The dog bit Swain on the arm and he fell to his knees, then Kempton pushed him forward onto the ground and put Jocko back on a leash, according to the ruling.

Somehow, however, a “struggle ensued” between Swain and the dog, and Swain rolled onto his back and began punching Jocko in the face. The dog bit his left arm and dragged him, holding him for 60 seconds until more officers arrived and intervened.

“It may have been an error of judgment on the part of the defendant not to have stopped and to offer[ed] a verbal warning. However, I cannot conclude that the officer’s decision to release the police dog was objectively unreasonable in all of the circumstances,” Solomon said.

The judge said he accepted Kempton’s explanation for letting his dog hold the bite for so long and said the officer’s actions appeared to be in line with national and provincial use of force guidelines.

Solomon also said the Crown had failed to prove that Kempton “meant to pervert, pervert or defeat the course of justice, or that he made any false or misleading statement, or that he had made substantial omissions” in his reports of the arrest.

Swain pleaded guilty to theft just five days after his arrest and was sentenced to one day in jail.