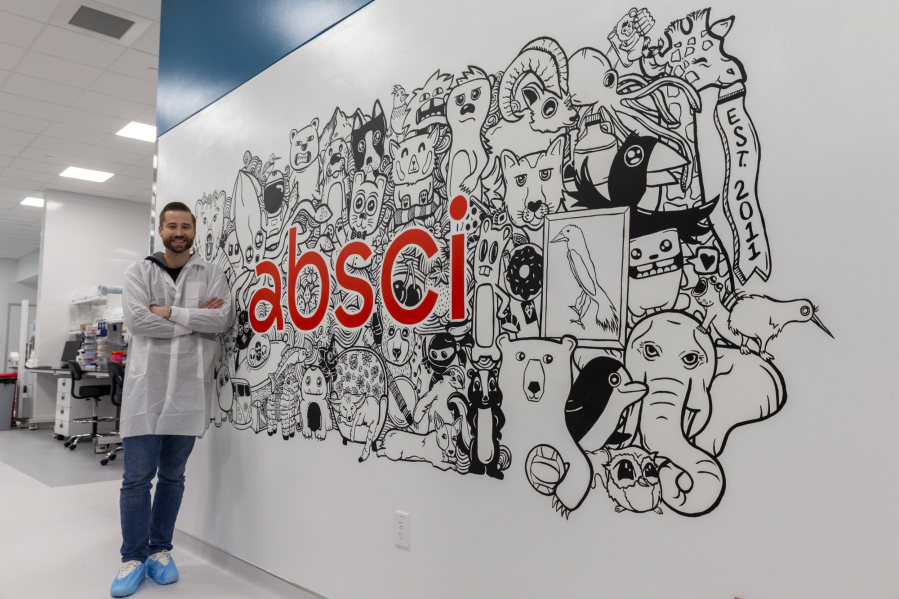 Vancouver-based Absci showcased its latest machine learning models this week, displaying a computer-generated model that can predict — with a high degree of confidence — a drug candidate formula.

“Our (artificial intelligence) can predict the best drug candidate with the functionality, developability and manufacturability that we want,” Sean McClain, founder and CEO of Absci, told The Columbian.

McClain said computers can take drug-developing scientists much further along the process of creating a drug candidate. And the formula determined by the computer has extremely high confidence – about 85%. Then it is tested in the laboratory.

“That means the drugs are going to get to patients much sooner than before,” McClain said. The streamlined process, he added, will also increase the likelihood of success.

“So (artificial intelligence) allows us to fully – on a computer – be able to search through all of this and figure out for a particular disease, what is the best medicine to design,” he said.

“It’s a huge, huge, huge breakthrough,” he added. The results are possible thanks to the technology that creates the data which can in turn be used by artificial intelligence.

Absci is working with NVIDIA, an interactive graphics company, to advance Absci’s drug pipeline with NVIDIA software and hardware and technical expertise from Absci and NVIDIA to extend and evolve machine learning models .

The Vancouver-based company presented its findings at NVIDIA GTC, a global conference on artificial intelligence.

“The huge breakthroughs we’ve achieved continue to drive our business development and partnership pipeline,” McClain said. “This is going to translate into increasingly active programs, which translate into long-term value creation.”

The company also announced its 2021 financial and operating results this week, a requirement for public companies, which Absci has been since last summer.

The announcement details that the company created five biologic drugs using its technology last year and three so far in the first three months of 2022. Absci has also partnered with Merck, a large pharmaceutical company, to create up to five drugs.

“We have a very strong pipeline,” McClain said.

The financial picture was not all rosy for the company as it recorded a net loss of $101 million last year compared to a loss of $14.4 million in 2020. The report also notes that Absci expects a net decrease in cash, cash equivalents and restricted cash. of $120 million in 2022.

“We expect to continue to lose capital because we’re making really big investments in (artificial intelligence),” McClain said. “The huge accomplishments we’ve had in space wouldn’t happen unless we invested in it.

“We have made it very clear to investors that we will continue to make these investments,” he added. “We’re going to continue to burn capital, but we’re seeing the impact of that and that’s a very big net long-term benefit.”

McClain called the company’s history “long-term”. Absci investors are in favor of this, he said. Cash burn and revenue are both in line with what analysts had expected, he added.

Absci trades on the Nasdaq under the ticker symbol ABSI. Share prices rose 5 cents on Wednesday to $7.53.