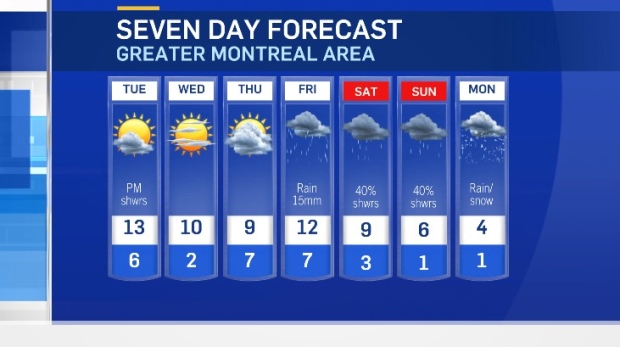 MONTREAL – After a mild first weekend of November in Montreal, the city is starting the work week with even warmer air.

The temperature at sunrise in Montreal on Monday morning was already 8 C, slightly warmer than the normal maximum for this period in November, which is 7 degrees.

The mercury is expected to climb to 14 C this afternoon.

Fall 2021 was marked by above-average temperatures and the warmer air kept the fall colors on the trees longer.

September had 25 consecutive days with highs above the 20 degree mark. This broke the previous record of 19 days in 2017. October was also exceptionally mild, with an average temperature 3.5 degrees above average.

October also saw 10 days with highs above the 20 degree mark.

Temperatures will stay above average throughout the week, but no records are expected to be broken in Montreal. A model change is expected before the second weekend in November.

The rain will set in on Friday. Persistent showers will continue through the weekend as temperatures drop.

By next Monday, Montreal could experience its first squalls of the season so far.

Scholars to meet at Toronto gala as five writers compete for the $ 100,000 Giller Prize

What new restaurants are there in Vancouver, British Columbia right now?