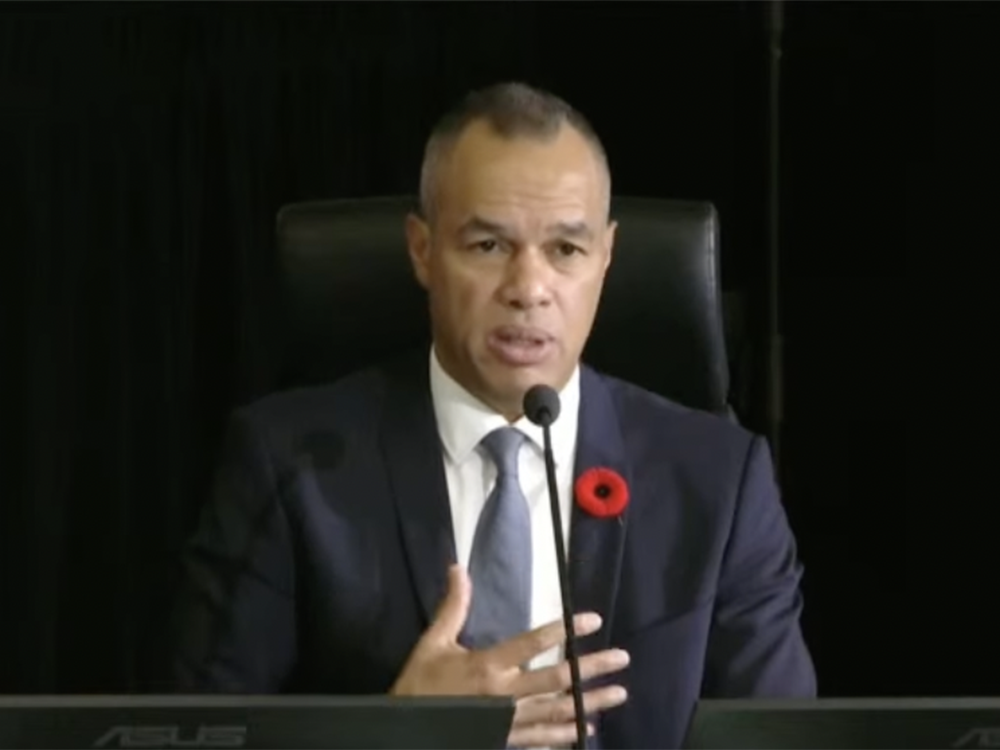 Former Ottawa Police Chief Peter Sloly testified Friday at the public inquiry into the federal government’s use of the Emergencies Act to extricate Freedom Convoy protesters. Sloly resigned the day after Prime Minister Justin Trudeau announced the legislation would be triggered in February. He resigned from his post amid widespread criticism of the force’s handling of protests, which congested the streets around Parliament Hill for three weeks, and as pressure mounted to remove heavy trucks. Watch his testimony in the video below.

It took only a few hours on that cold Saturday in January for Peter Sloly to see his previous understanding of the “freedom ferry” crumble and realize he had an occupation of the capital on his hands, said said the former Ottawa police chief during a public inquiry on Friday.

The scramble by police over the next few days to come up with a plan to get out the crowds and heavy trucks that were blocking downtown Ottawa at one point prompted a senior officer to suggest they might want to do call in the army, the investigation also learned.

The ex-chief was a much-anticipated witness to the Emergency Public Order Commission, which is examining the Liberal government’s unprecedented decision to invoke the Emergencies Act to help clear blocking protesters the streets around Parliament Hill and several border crossings.

Sloly resigned on Feb. 15, the day after Prime Minister Justin Trudeau invoked the law, amid widespread criticism of how he and Ottawa police handled the week-long protest.

The Emergencies Act is intended to be used when an urgent, critical and temporary situation threatens the life, health or safety of Canadians, whether the provinces are believed to lack the capacity or the authority to react and that the crisis cannot be managed effectively with existing laws.

During his testimony on Friday, Sloly defended his reading of intelligence reports and briefings he received in the days before protesters were expected to arrive in Ottawa on January 28, which he says led him to believe that the protest against the COVID-19 mandates would largely be a three-day event, with some protesters later setting up a “tent city” in a park.

The commission, which has scheduled public hearings in Ottawa until Nov. 25, has already been told that the OPP provides regular intelligence updates to Ottawa police. Copies of these reports, which warned that protesters might refuse to leave, were submitted to the investigation as evidence.

These reports showed officers reporting that those heading to Ottawa had no date in mind to leave and how their plans to bring in heavy equipment suggested they intended to dig and had the means. financial to do so.

Despite this, Sloly testified that he thought most would leave after the weekend, until the “Freedom Convoy” protest, which saw trucks arriving on January 28, really started on January 29.

‘The nine o’clock briefing I received on Saturday morning… was still talking about a weekend event,’ he told the inquest.

Hours later Sloly testified, he realized he was dealing with something completely different. He said police were overwhelmed as thousands of trucks, other vehicles and protesters poured into the city and converged near Parliament Hill.

“It happened so fast.”

Tears welled up in the former chief’s eyes and he stopped when commission counsel asked how his officers handled that first weekend.

“They were doing their best under inhumane circumstances,” Sloly said.

“It was too cold and it was too much.”

Sloly also said he doesn’t believe he has the legal status under the Canadian Charter of Rights and Freedoms to stop protesters from parking their trucks and other vehicles downtown.

The former leader says that not just one “freedom convoy”, but several descended on the city. He asked why he didn’t receive intelligence from federal agencies about what was happening as protesters moved from different points across the country.

Sloly told the commission that in the days after the protesters arrived, the highest ranks of the police suffered from disorganization and a lack of communication about developing a plan to end the protests. blockages.

Minutes of a Feb. 1 meeting between Sloly and other senior officers show that as they discussed various enforcement options, Deputy Chief Patricia Ferguson asked about “the possibility that military are called or a state of emergency is declared”.

Sloly replied indicating that everything was on the table.

On Friday, Sloly was also asked about a public comment he made the day after the meeting, when he shared that he was “increasingly concerned that there is no solution. police to that”. The remark caused much confusion at the time.

“It was a national event,” Sloly said Friday. He said he was referring to the fact that the size and scale of the protest was too much for a single police force to handle. He admitted that in hindsight he should have been clearer about what he meant.

Sloly began his testimony on Friday by calling himself an “outsider” chief, who was hired in 2019 after spending more than 20 years with the Toronto police.

He says the Ottawa Police Board hired him to set the culture within the force and to build trust with Black, Indigenous and other racialized communities in the city.

He testified that in the spring of 2020 his leadership was challenged by the COVID-19 pandemic, a senior executive reshuffle and louder calls to withdraw police funding after the police killing of George Floyd. , a black man in Minneapolis.